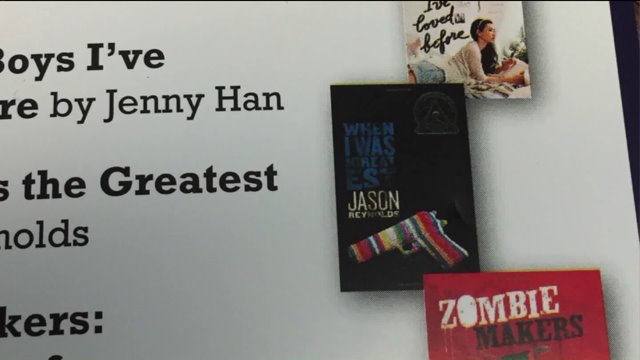 NEW YORK – A book with the image of a gun on its cover is drawing the ire of and igniting concern for city parents after it became recommended reading from the Department of Education, but the DOE and the author say the book is age appropriate and delivers an important anti-violence message.

The book "When I Was The Greatest" has been praised for its message of anti-violence, winning the Corretta Scott King Award and being recognized by the New York Public Library among others. But the cover image of a gun wrapped in crocheted yarn drew the ire of some parents after the book appeared under recommended reading for 7th and 8th graders in the "New York City Reads 365" pamphlet.

While the book does discuss drugs and guns, albeit briefly, author Jason Reynolds says the story is really about three young men in Brooklyn dealing with friendship, family, and the cool and confusion of growing up.

He says the crocheted gun on the cover was meant to be a provocative take on yin and yang: a thing used to bring pain wrapped in something used to provide warmth.

"The other thing that we wanted the cover to do, was exactly what it's doing: be something that people have questions about. If a young person sees another young person reading this book, they can't help but ask what it is. And that's a good thing," Reynolds said.

Leah Gunn Barrett, executive director of New Yorkers Against Gun Violence, said she hasn't read the book, but given the targeted age group for the story, she said the image does pose some concerns.

"I think you don't judge a book by it's cover, however, I think given the problem our nation has with gun violence, the number of children who die every day, who are victims, 90 Americans die every single day I think that perhaps it was a poor choice," Gunn Barrett said.

The DOE, which put out the pamphlet, said this was the first time anyone had questioned the book as recommended reading.

"While this book is on a list encouraging daily reading for pleasure and is not mandated, it is an age-appropriate and engaging story, and we are confident students will understand and appreciate its message of nonviolence,” department spokesman Will Mantell said.

Some parents who spoke to PIX11 News agree.

Molly Myers said a book, like this one, that acknowledges guns while promoting anti-violence can help start an important discussion.

"It's an issue that all parents should try to tackle with their children," Myers said. "And if this book is good at teaching that, then they should embrace that."