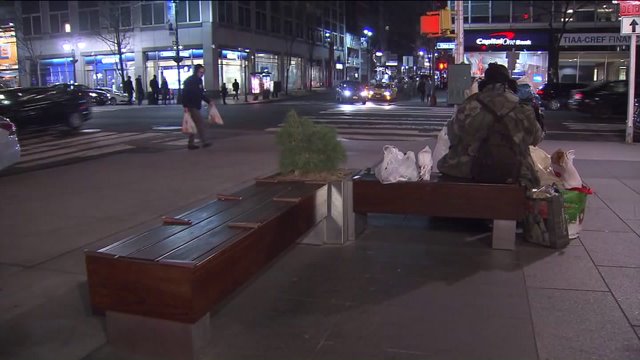 NEW YORK — As 45-year-old Nakeesha Williams braces for the first really cold night of this winter, on the corner of 46th and Third Avenue, we asked this homeless woman her thoughts about Governor Cuomo's executive order, requiring communities to forcibly take homeless people from the streets to shelters when the temperatures dip below freezing.

"It makes sense, but where do we put people. It's not always the easiest," Williams said. "Is it sanitary or safe? Those are the issues."

Cuomo announced Sunday with a release and a round of television and radio interviews that he has signed an executive order to protect the homeless. It takes effect Tuesday.

Governor Cuomo said that he is looking for a uniform statewide standard to deal with the growing homeless problem in New York City and other communities.

The order came as temperatures in parts of New York State were expected to dip below 32 degrees throughout the week. Cuomo's order calls for police departments and social service agencies to do what they can to get individuals into shelters, including those reluctant to go.

"It's in keeping with the spirit of the holidays," Governor Cuomo told NY1 in a telephone interview. "It's about love and compassion and helping one another. It's about basic human decency."

The governor said the order was necessary to protect individuals from hypothermia and potential death.

The order takes effect even if only the wind chill temperature is below 32 degrees.

Gov. Andrew Cuomo says he's ordered homeless shelters to extend hours so anyone without a home can remain indoors when temperatures are below freezing.

To some however, this Executive Order fans the flames in the ongoing feud between the governor and Mayor de Blasio.

The mayor's spokesman said, "we support the executive order but to forcibly remove all homeless individuals in freezing weather as the governor has ordered we require him to pass state law. This Executive Order adds no legal or financial resources to New York City's programs to assist the homeless."

Now Nakeesha weighs her options as it gets colder and colder.

"Last year I managed to ride the trains all night," Nakeesha told PIX11. "There's hotel I like save up for in Brooklyn."