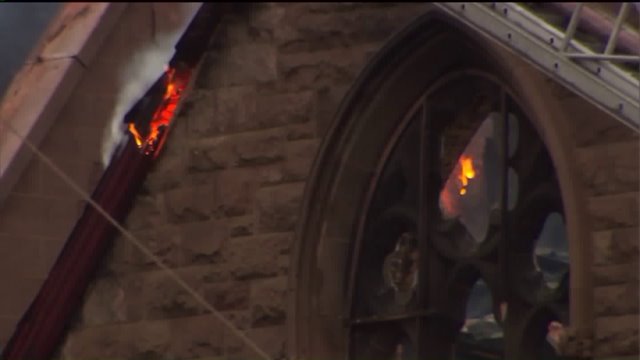 WEST ORANGE - St. Mark’s Church on Main Street, now named Church of God Liberation for the Souls, was badly damaged in a three-alarm fire that began around 5 a.m. on New Year’s Day.

The nearly 200-year-old building was completely hollowed out by the flames and it’s roof collapsed. Firefighters from seven towns tried to stop the fast-moving fire, which was fueled by strong wind.

The church was built in 1828 and is a National Historic Landmark.

“This part of the town is known as St. Marks, this is the neighborhood that the church has given it’s name to,” said West Orange Councilman Joe Krakoviac, "It’s a focal point of the town, it’s historic beyond measure, it’s a terrible tragedy.”

The church's chaplain said that his congregation of roughly 200 people are devastated.

“We know that we serve a passionate and a God that will pretty much help us prevail through this tough time,” said Chaplain Douglas Hernandez, who belongs to the International Federation of Chaplains, which purchased the building in March of 2015.

The West Orange Historic Preservation Commission noticed that the new owners had removed some stain glass windows, and later discovered construction in the building that was done without proper permits.

“We’re coordinating that with the township to make sure that we comply,” responded Hernandez, when asked about the work.

Hernandez said they were issued a stop work order and fined by the town, after an HVAC system was installed without a permit. Because of the building’s historical designation, they are required to get a permit from both the local historic preservation commission and the West Orange building department. Unpermitted gas and electrical work was done at the site, according to the West Orange Historic Preservation Commission.

“I do know that the West Orange historic preservation commission was working hard to get them to follow the rules,” said Councilman Krakoviac.

The Essex County Prosecutor’s Office is investigating and has not yet determined a cause for the fire. No one was hurt.