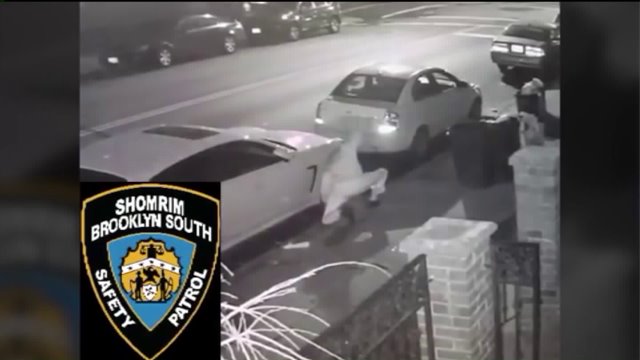 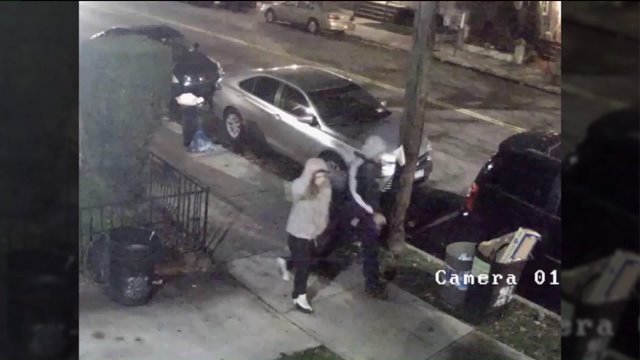 MIDWOOD, Brooklyn — A 55-year-old Jewish man walking home from the train on Avenue M at 1 a.m. was repeatedly punched, thrown to the ground by two assailants in hoodies, police said.

They reached into the man's pockets and took his wallet and cellphone. They continued to kick the victim repeatedly in the head. They eventually fled the scene, running down Avenue M towards Ocean Parkway.

The two men are described as having a thin build. They were wearing grey hoodies at the time of the attack. (NYPD)

The sheer brutality of this attack is what has community leaders so outraged.

"When you watch the video and you watch the brutality and horror of two animals," Assemblyman Dov Hikind said during a sidewalk news conference.

The victim, his first name is Eli, is in stable condition at Maimonides after receiving between 70 to 80 stitches to his head.

Surveillance cameras on surrounding homes captured this vicious robbery from several angles where the two assailants jumped into a waiting black car being driven by a third man.

At this point, police are calling this a robbery and not a bias attack.

"It's an attack on humanity when you do something like this," Hikind told PIX11. "We don't think this is a bias attack, but the commanding officer of the 66 precinct is handing it over to the bias unit because you never know."

"We will have 50 members who will patrol the streets day and night in our private cars," Robert Moskovitz, Flatbush Shomrim Safety Patrol executive coordinator, told PIX11 News.

Shomrim safety patrols are being stepped up as detectives canvas the area and neighbors are fearful.

"I'm really surprised even after they took his wallet and his money, they kept on beating him," Ariel Cohen, a neighbor, said.

"It makes you wonder," Leslie Hefez, a neighbor, told PIX11 News. "We need to be vigilant and careful about going out at night."

Police are offering a $4,000 cash reward to anyone with information on the suspects.