New York City police on heightened alert ahead of holidays 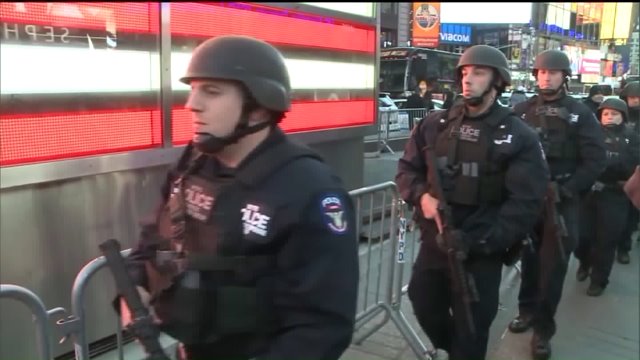 CORRECTION: This story has been amended after NYPD officials denied a report, based on sources, that there was a "credible threat."

NEW YORK – New York City police officers were reminded Tuesday in a memo to be on heightened alert ahead of the especially busy holiday season when tourists flock to the Big Apple, law enforcement sources told PIX11 News Tuesday.

Separately, a  federal law enforcement source told PIX11 of a possible threat that could face any one of several major U.S. cities. Few details were released about the nature of the threat.

NYPD officials told PIX11 after the release of this report that there is no specific "credible threat," as the earlier version of this report, based on sources, had stated.

All New York City police officers received a bulletin Tuesday afternoon outlining the department’s tactical plan and warning officers to stay vigilant, according to sources. That internal memo mentioned social media being used as a tactic and that a possible attack could come without warning.

Expect to see increased police presence at iconic locations across multiple boroughs, including Times Square, St. Patrick’s Cathedral for Midnight Mass on Thursday, and Barclays Center in Brooklyn, marking the first time a threat has sparked a swell of police presence in a borough other than Manhattan.

This comes exactly one week after a menacing email was sent to public school districts in New York and Los Angeles. That “specific” message, which Bratton said contained outlandish threats that mirrored recent episodes of the show “Homeland,” sparked the total closure of Los Angeles schools. Officials in New York determined the emailed threat was a hoax.

Still, New York City has been on high alert since the Nov. 13 terror attacks in Paris that killed 130 victims and injured hundreds more in a calculated assault executed by three teams of three assailants each, armed with explosive vests, belts and assault rifles. ISIS took responsibility for the carnage.
After the Paris attack, a video released by the terror group surfaced showing several scenes in New York City, including Times Square, a GAP in Herald Square, T.G.I. Friday’s and yellow taxi cabs on city streets.

At the time, Bratton and Mayor Bill de Blasio said there was no new or credible threat against the city but urged residents and visitors alike to be vigilant and report suspicious activity.

Then, on Dec. 2, a married couple unleashed a terror attack at a facility for individuals with developmental disabilities in San Bernardino, Calif., stoking the fear of terror attacks happening on U.S. soil.

Armed with multiple assault rifles, Syed Rizwan Farook and his wife Tashfeen Malik burst into a conference room at Inland Regional Center and opened fire. In all, 14 people were killed, ranging in age from 26 to 60, and 21 victims were hurt. The suspects were shot dead when they tried to take on dozens of police officers as they fled in a black SUV.

FBI investigators said Farook and Malik had been “radicalized for some time” but said they likely were not directed by ISIS to carry out the attack.

Any suspicious behavior should be reported to the nearest police officer, by calling 911 or 1-888-NYC-SAFE.

Tips can also be submitted via the app “See Say,” which lets users send a photo or message of any suspicious activity they see to the New York State Intelligence Center. Officials will then review the tip and if it’s a major threat, will call in additional law enforcement.

The app doesn’t replace the 911 system, but rather is another way citizens can help prevent a potentially deadly attack.