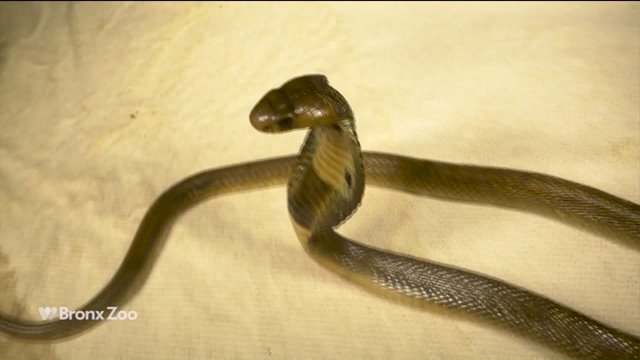 BRONX – A scaly stowaway is now recovering at the Bronx Zoo after crew found the cobra on a cargo ship heading for Elizabeth-Port Authority Marine Terminal in New Jersey, according to zoo officials.

"When we located the snake deep below the deck of the container ship it was in very poor condition," said one of the two Bronx Zoo staffers who helped bring the 18-inch cobra to safety.  "We are cautiously optimistic regarding its recovery."

The snake was in poor condition when it was pulled from the cargo holds of the MV Maersk Sana – dehydrated, cold and exposed to oil residue.

The ship was traveling from Singapore to the United States when crew members found the extremely-venomous snake.  Two herpetologists from the zoo, Kevin Torregrosa and Avi Shuter, boarded the ship in New Jersey carrying snake tongs and hooks, a snake bag, headlamps and antivenin.

After climbing down eight stories into the hold of the ship, the two found the snake after about 30 minutes.  After successfully bagging the cobra, they took it to the veterinarians at the Bronx Zoo.  It's estimated to be about one year old.

Cobras prey on rodents and small animals; they are found across Southern Asia.

“We have not yet determined if the cobra will remain at the zoo permanently" said Jim Breheny, Bronx Zoo Director and WCS Executive Vice President of the Zoos and Aquarium. “At present, the snake is in quarantine and under treatment at our wildlife health center. Our main concern is to restore it to good health. We were happy to assist the ship’s crew and the U.S. Fish and Wildlife Service with this rescue.”