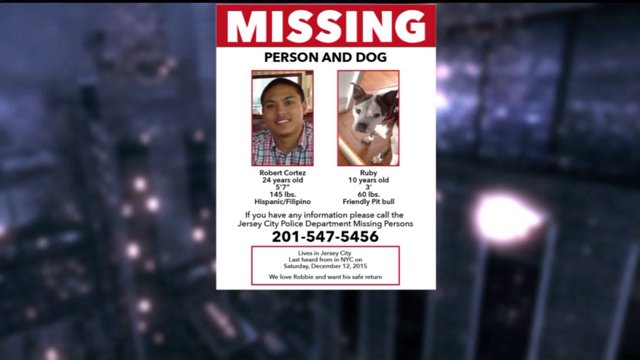 JERSEY CITY, New Jersey – The mother of a missing Jersey City man is asking anyone with information about her son's whereabouts to help her find him.

Robert Cortez, 24, left his Jersey City apartment over the weekend and hasn't been heard from since Saturday, December 12.

Robert Cortez was last heard from Saturday, December 12. He is believed to be with his pet pit bull Ruby. (Handout)

Cortez, who is 5 feet 7 inches tall and weighs around 150 pounds, was last seen by relatives in Hoboken with his pet pit bull Ruby.

He may be somewhere in New York City now, police believe.

"We love Robbie and want his safe return," said his mother Nancy, who is asking anyone who might have seen him to call her Jersey City Police Dept. of Missing Persons at (201) 547-5456.