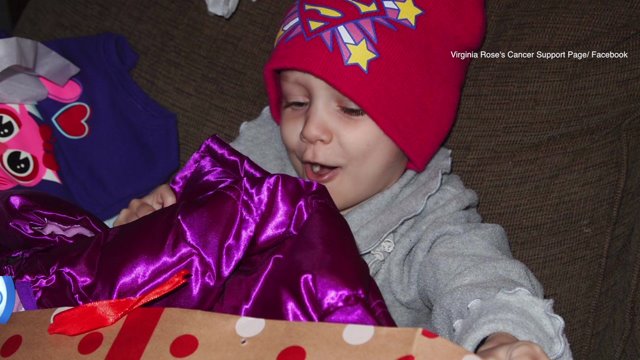 VIRGINIA – A little girl in Virginia has been celebrating Christmas every weekend with her family and neighbors for the past few months – but not just because they love the holiday season.

It's because doctors say that the 4-year-old probably won't live to see another Christmas.

Last year, Virginia Rose Vandermark was diagnosed with a rare form of leukemia and in September, after failing two rounds of chemo and developing heart failure, her dad Jonathan says doctors gave his family the grim news.

It was then that the Vandermarks decided they would celebrate Christmas every weekend with their little girl, and their neighbors also jumped into action.

Donated angels and other gifts have come from all over Virginia, and even as far as New Jersey, New York and California Jonathan says his family has been overwhelmed with love.  They are now on display, decorating the front lawn.

According to the family's Gofundme page, the little girl is still fighting every day. Her family is waiting to see if a bone marrow transplant will be the Christmas miracle they are praying for. But until then they say, they are simply grateful for the love and support from complete strangers who have heard about Virginia Rose's story on social media.