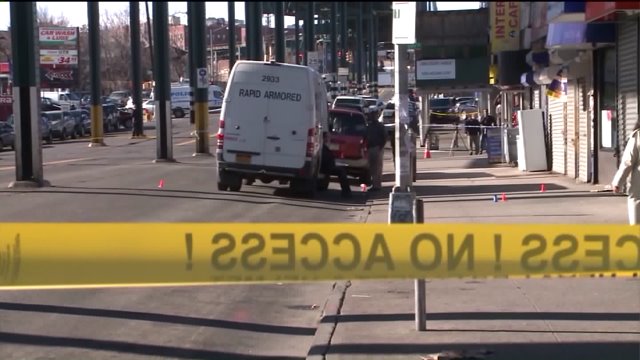 THE BRONX — An armored truck was robbed at gunpoint Tuesday in the Bronx by a well-dressed man wearing a black suit, police said.

Police are looking for an armed, well-dressed man suspected of robbing an armored truck. (Nicole Johnson)

It happened about 10:30 a.m. outside a check-cashing storefront at 1471 Westchester Avenue, where the vehicle was parked for pick-up, police said.

A man approached the guard, pulled out a gun and demanded cash, police said. Multiple rounds were fired but no one was hurt. The thief, however, made off with a bag stuffed with tens of thousands of dollars in cash.

NYPD initially valued that bag of cash at $78,000 but later said the exact amount of money taken is not yet known.

Police believe the man had a getaway car waiting about two blocks away.

A police spokesman said he was not sure if shots were fired during the encounter.