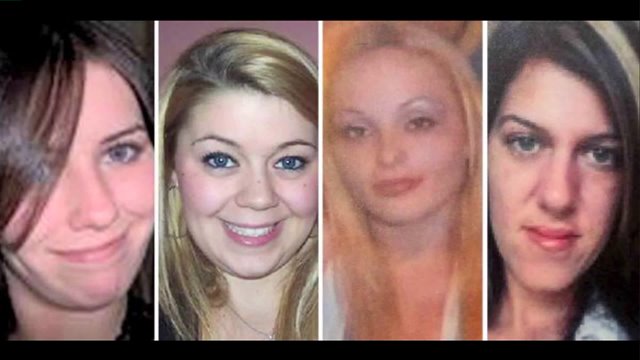 NEW YORK — When the body of young sex worker, Melissa Barthelemy, was discovered wrapped in burlap — in the brush off Ocean Parkway in Gilgo Beach, Long Island — little did police realize they were about to stumble on more victims of a serial killer. It was Dec. 11, 2010.

The next day, three more young women — also wrapped in burlap — were found in the same area. All four had advertised their services as "escorts" on the Craigslist website. One had disappeared in 2007.

The missing woman who inspired the initial search — another escort named Shannan Gilbert — was not among the original victims discovered. Four more victims turned up in March/April 2011, but they weren't wrapped in burlap. And there was a match made between a torso found in Manorville in 2003, and the skull and hands that were discovered in Gilgo Beach in 2011. The body parts belonged to Jessica Taylor, who was a 20-year-old sex worker. The killer had tried to unsuccessfully gouge out a tattoo on her body.

All totaled: 8 women, a young man dressed as a female, and a little girl, are believed to be victims of the still elusive serial killer.

Shannan Gilbert is not officially listed as one of the killer's victims.

Her last call was in Oak Beach, a mile east of Gilgo, in May 2010. She was seen running house to house screaming for help, shrieking to a 911 operator, "They're trying to kill me!"

Investigators believe a frantic Gilbert ran into a marsh and drowned. A year after the first Gilgo victims were found, Gilbert's cell phone, clothing, and finally, her body, were found in the marsh.

Now that a brand-new Suffolk County police commissioner, Timothy Sini, has asked the FBI to join the case, perhaps we will get some answers.