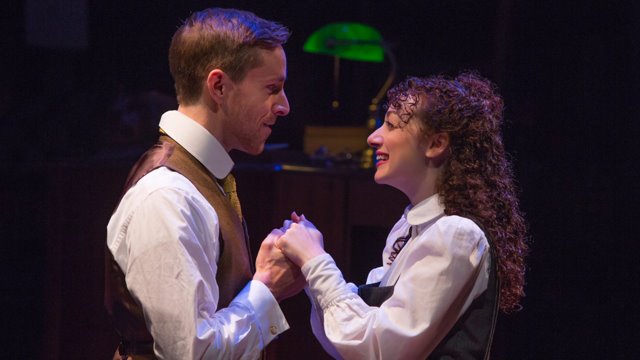 Her show, Daddy Long Legs, which she's been a part of for six years, will be streaming live for free Thursday (Dec. 10) night.

“The first time any Broadway or off-Broadway show has streamed live, the full show, ever on the internet,” she said.

A big Broadway first, she's thrilled to be experiencing with co-star, Adam Halpin, who also happens to be her leading man off stage.

“We are traveling to and from work separately," he said. "So that’s been kind of cool."

Just one of the rules this couple follows to keep their private and professional lives independent.

“Our director suggested it to us," Halpin said. "We didn’t come up with the rules on our own," McGinnis laughed.

They've been married for two years and now star together in this sexy off-Broadway show.

“First of all it’s 1908 sexy, so that’s a different kind of sexy, much more romantic which I feel like is what we take away from it," McGinnis explained. "The lost art of writing love letters too, we should write each other letters now,” she turned and said to Halpin.

The musical, made famous on screen by Fred Astaire and Leslie Caron, is about an orphan who gets sent to college by a rich, anonymous benefactor. The only catch, she must write him a letter once a month.

“Of course they fall in love, but she’s still writing him these letters not knowing it’s him,” McGinnis said.

Like their on-stage love, their real life romance has quite the back story.

“When we first met, I was in college and I was extremely impressed with her, you get like talent crush,” Halpin gushed.  "So when I got to speak with her after I’m sure my eyes were totally glazed over and she was even more charming in person.”

A few years later they were re-acquainted.

“Then he Facebook messaged me about volunteering for the Obama campaign so we went to Pennsylvania together and then he asked me out on a real date,” McGinnis remembered with a smile.

And the rest is history, like, they hope their first online global audience will be.

You can watch the free, live stream here. The show, which plays at the Davenport Theater, starts at 8pm (ET).

Following the live broadcast at 8PM EST, the performance will be replayed in the respective times in Los Angeles, London and Tokyo to allow visitors from all over the globe to watch the show in prime time hours.