New transit fare could save you time, but at what cost? 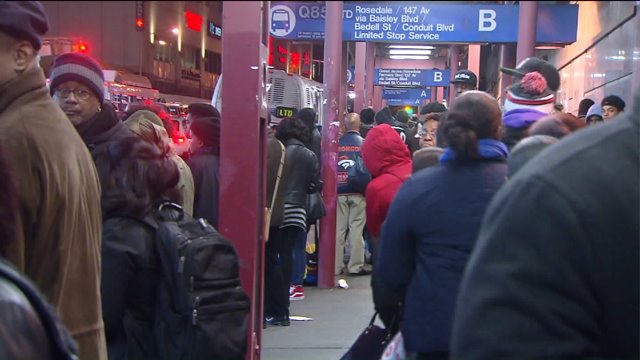 Imagine taking a bus to the subway amd knowing a quicker way was possible. Riding the railroads costs more, but some elected officials and transit advocates are proposing a new ticket.

In the city, some people who live close to the Long Island Rail Road and Metro-North don't ride it.

The subway and bus are less expensive options. But those commutes are longer.

Some elected officials and transit advocates are proposing a new ticket to serve areas with limited transit options.

New York City Transit Riders Council, an advocacy group made up of riders, says the "Freedom Ticket" would be comparable to MTA Express Bus routes. Riders could take the railroad and a MetroCard transfer would be included.

During a presentation to reporters, the advocates said LIRR data shows there is available capacity and seating on the routes from Southeastern Queens and in Brooklyn.

A test of the ticket could begin in Southeast Queens in 2017.

Metro-North is also expanding stations in the Bronx and NYCTRC proposes a final phase later to include those areas.

The full presentation is available on the NYCTRC website.

MTA staff have seen the presentation. PIX11's Greg Mocker asked  MTA Chairman Tom Prendergast about the plan and Prendergast said it needs to be considered as part of the fare-proposal package that will be discussed next year.

The riders council has suggested the City of New York could help cover the costs of this specific item. New York City Council's Transportation Committee held a hearing in November and discussed a similar fare proposal.

Riders say they're willing to consider paying a little more to save as much as 40 hours each month. They want to see the details and schedules.

Rochdale Village is located across the street from the Locust Manor LIRR Station, which is a 29-minute ride to Penn Station. Riders currently buy a $220 monthly LIRR pass and $116.50 unlimited MetroCard. The Freedom Ticket proposal would create a ticket that would cost $215.

The bus and subway ride into the city costs $116.50 but can take up to an hour and a half.

The MTA currently offers, on the weekends only for travel in the boroughs, a discounted LIRR and Metro-North "City Ticket" for $4.25 (except Belmont and Far Rockaway).