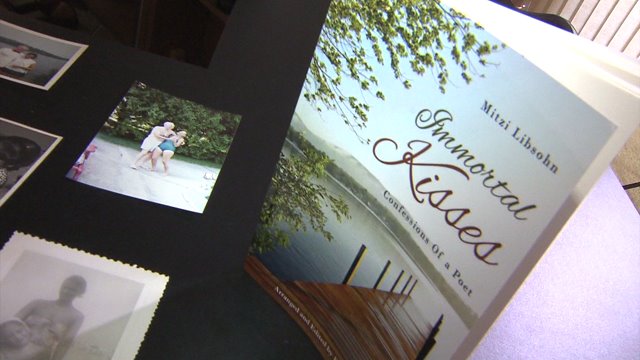 In this week`s Stories from the Heart, PIX11 talks to a woman who finally published her mother`s poetry, years after she passed away.

“The young tree moves in agitation, to arrange her hair made perverse by gnarled nests,” Pauli Rose Libsohn reads

A verse Pauli Rose Libsohn holds dear to her heart.

"Amorous arms rise commandingly to restore calm, to the last movement of our duet”

It's called 'Duet' and it was the first poem her mother ever wrote.

Mitzi Libsohn was also very much in love with David, her husband of 60 years.

“They met on the beach at Far Rockaway back in the 1930s, my father was a lifeguard,” she smiled. "And she fell madly in love with my father, so what she did was bring books to the beach and assign him things to read and he couldn’t get over that.”

It wasn't until age 49 though when she put pen to paper and memorialized her love story. Pauli Rose credits her own college writing assignment as her mom's catalyst.

"It was to write a poem and I was very nervous about it and didn’t know how it was going to turn out,” Pauli Rose remembered. “So, I said can I read it to you and will you tell me if it’s good or not. Then that night I came home and low and behold, she said come here, sit down at the table, I wrote a poem.”

And she kept writing for 35 years.

"And this is the box that my mother kept all her papers in,” Pauli Rose said as she carried in a huge box. "It's a bottomless well!"

Handwritten works of art, this proud daughter wanted to share with the world.

“I told her these are fabulous!" she said. "At the end of 90s we started to get the manuscript together then my father got sick in the year 2000 and we had to put everything on hold.”

“My mother was devastated,” Pauli Rose remembered. "She only lived another two years after that.”

Pauli Rose put the poems away fro a long time as she tried to cope.

“Something came to me, look you’ve got to get that manuscript out and I did," she said. "I worked on it for about four years.”

At first no one want to print it but she eventually found Page Publishing and just recently released ' Immortal Kisses: Confessions of a Poet '.

“Like it just happened, that’s how fast the years go," she said as she flipped through photo albums.

And she couldn't be more grateful her mom's words are finally being heard.

“I wanted this for her, I was very passionate about it, she deserved it, she worked so hard on it,” she said. "It’s the promise that I kept to her to have this book published and I’m immortalizing her.”