Islamic village in Catskills battles threats and suspicions about its activity 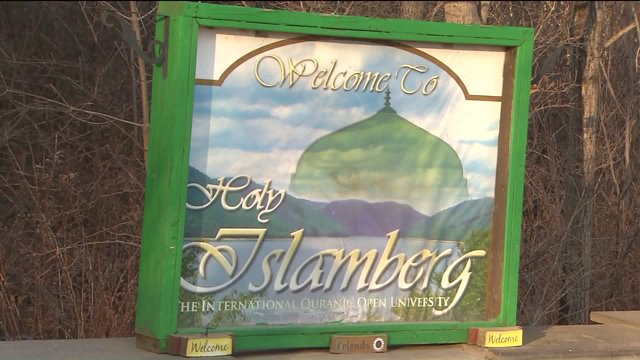 ISLAMBERG, N.Y.— When PIX11 News drove three hours northwest—seeking a small village in the Catskills called Islamberg—we found a man sitting inside an SUV near the mailboxes, as we pulled up to the entrance.

When we introduced ourselves and asked him about a recent threat made against the community, he told us, “It’s better you talk to the attorneys about it.”

Islamberg was established more than thirty years ago by Sheikh Mubarik Gilani, a Pakistani cleric.  It is the headquarters for the Muslims of America, and we’re told about thirty homes and trailers are located on the Islamberg property, which is located about ten miles west of the town of Hancock, in Delaware County, New York.  Many of the residents here are African-American, and some left behind city life to settle in the mountains. Gilani doesn’t live here, but he is known internationally.  More than a decade ago, Wall Street Journal reporter, Daniel Pearl, was on his way to an interview with Gilani in Karachi, Pakistan, when he was kidnapped.  Pearl was later beheaded.  Gilani was questioned about the abduction but never charged with any plot against Pearl.

Gilani has been featured on the “60 Minutes” news magazine and has steadfastly maintained his followers are not anti-American and once said they’re better off in America than anywhere else.

But Islamberg is one of up to 30 Islamic villages nationwide, affiliated with Gilani and his followers, that have drawn the attention of law enforcement and certain right-wing groups.

Videos have been posted on the Internet that purportedly show women in Islamberg doing military-type training.

The Executive Director of Islamberg, Hussein Adams, told PIX 11 “We’ve never had any guerilla training within our community.”
Adams added, “If we were planning an attack for the last thirty years, why hasn’t it taken place?”

Adams has taken pains, at public press conferences, to make the point that the residents of Islamberg want to peacefully practice their religion and raise their families, just like other Americans.

In recent weeks, the FBI and New York State Police  have been monitoring a threat that was posted on Facebook against Islamberg on November 19th-- by an ex-marine, Jon Ritzheimer, who was living in Phoenix, Arizona.

Ritzheimer is seen flashing a gun, shouting profanities, and threatening to drive across America to New York, angry that a news article published by Muslims of America in “The Islamic Post” labeled him ‘American Taliban.’

“Our concern is that someone with mal intent is going to come up here and cause a problem for these folks,” said Captain James Barnes of the New York State Police.

“There’s multiple generations of people that have lived there,” Barnes added.  “It’s our job as the state police to protect them just like we do everybody else.”

When PIX 11 spoke to Hussein Adams on the phone—he discussed two threats Islamberg has received this year.

Regarding the most recent, from Ritzheimer, Adams said of FBI agents, “They should have arrested him, as soon as he crossed state lines.”
No one seems to know where Ritzheimer is right now.

Earlier this year, a one-time congressional candidate from Tennessee--Robert Doggart--was accused of plotting an attack on Islamberg’s mosque and school, using automatic weapons.

Doggart reportedly contacted a militia group for help with his plan.  The 63 year old suspect pleaded not guilty, and his trial has been delayed until January. He’s also been released from jail, pending the trial.

When we visited one of the towns close to Islamberg—Hancock—the owners of the Cozy Corner Diner only had positive things to say about the community.

“The boys used to go to school here,” Matoka Martin said.  “And the girls were home schooled.”

Martin added, “they shop, do their laundry and do what everyone else does and then go home.”

Law enforcement investigators—on the local, state and federal level—still seem divided about what kind of activities are going on inside the insulated community.

Hussein Adams said the real threat is coming from people like Jon Ritzheimer, calling Ritzheimer “a threat to the American people and his country.”