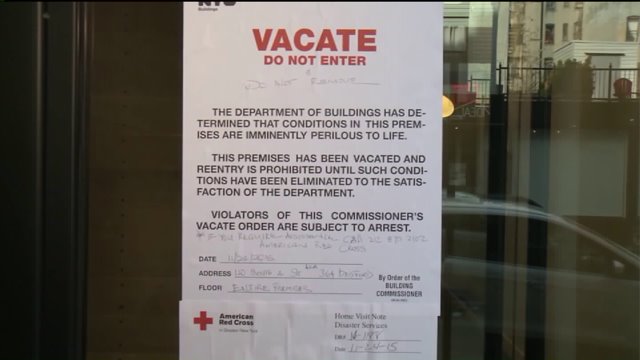 WILLIAMSBURG, Brooklyn -- It's a high-rent building that was constructed by a developer who was murdered last year. Now, the building he built has suddenly been condemned, just in time for the holiday season.  The ordeal has left dozens of residents without homes in the latest chapter in a story with many twists and turns.

A look from outside 120 South 4th Street shows that it's a new, luxury building, with its glass-enclosed mini balconies and floor-to-ceiling windows in many of its lofts.  A closer look, however, is what Department of Buildings inspectors carried out twice this month, and some things that are not visible from the street are what caused the DOB to issue a vacate order for the entire building on the day before Thanksgiving.

It came as a great surprise to many residents, including a tenant named Melissa, who asked that only her first name be used in this story.  She, like many of the residents of the 20-unit building, is upset.

"Basically, [we were] given about an hour or so to get our stuff and leave," said Melissa, 28, who, like many of the residents of the neighborhood, shares her apartment with friends.

On Wednesday, they were sent an email from Garden Management, which manages the property.

"It seems like this management company has a history of some interesting doings in the city," said another tenant, Victor Bill, 27. He was referring to the fact that Garden Management was once controlled by Menachem "Max" Stark, a developer who gained a reputation for creating as many critics and enemies as he did friends.

Stark has been in the news before, in a tragic way:  he was abducted in January of last year, and the crime was recorded on surveillance video. He was later found suffocated and burned.

Today, Stark's company still owns and runs the South 4th Street building, and is trying to deal with the City's order demanding that tenants vacate. Garden Management, which has changed names at least three times in two years, according to residents, told them in an email this week that "they have 'engineers and expediters,' whatever that is," said Melissa, "coming to fix the issue as soon as possible."

She said that it's the latest in a steady string of problems that she and her three housemates have had over the two years they've lived in the building.  It has not been cheap.  "We have a four bedroom for 5500 [dollars]," she told PIX11 News.

"We didn't have walls our first four months living here," she said. "We were supposed to break the apartment into the four bedrooms," she said about the loft they leased with the promise that structural work would start on it within two weeks. "We had no walls until May," said Melissa. "We moved in in January."

PIX11 News went to the office that's listed in Garden Management's letters, seeking to get word from them about what will happen to tenants' rent and deposit payments.

Their listed address is in a residential building, which, neighbors there said, also houses a postal box business.  The suite that Garden Management claims as its headquarters is actually a P.O. box at the small, privately owned mail delivery center.

Also, nobody answered the phone at the number listed for Garden Management. They close at noon on Fridays.

"They basically walked in and said, 'Get out,  you have to vacate,'" Barca said, "in the middle of a work day."

The DOB had ordered her and her staff to leave last Tuesday, when inspectors first found structural issues with the building.  "They didn't really give the landlord a chance to show any records," said Barca. "They just deemed it unsafe and vacated the tenants as well."

For its part, the Department of Buildings sent PIX11 a statement that said, in part, "The Department inspected the premises on November 10th in the course of an audit of recently-constructed buildings. Inspectors found a concrete floor that was poured without a permit and structural work that did not conform to code. The Department followed up with an inspection of the entire building on November 24th, which revealed substandard structural columns and other elements, primarily in the building’s cellar and first floor. A full vacate order was issued out of concern for the building’s structural integrity.  While we understand the inconvenience and stress this put upon families, particularly during the holiday season, keeping people safe has to be our top priority. ”

It added that it had coordinated with the Red Cross to ensure that residents had emergency housing until the issues have been resolved.  It's not clear how long that will take, although the DOB described the structural problems as "significant."