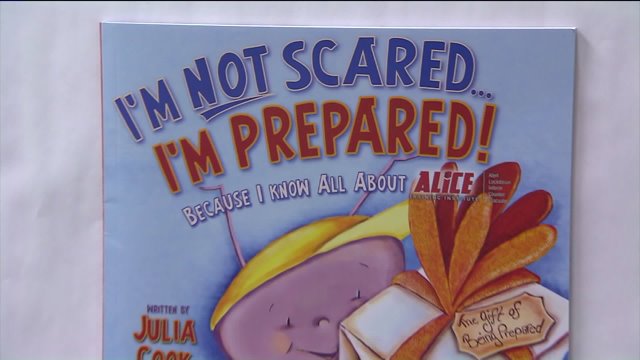 NEWTOWN, Conn. – It's an uncomfortable reality for parents:  active shooter training in our children's schools. Now there's a new picture book that aims to teach kindergarteners how to get out alive.

Three years ago this December 14th marks the darkest day of Nicole Hockley’s life. It’s the day her six-year-old son Dylan was killed in school.

Dylan Hockley was one of 19 students at Sandy Hook Elementary School, murdered in their classrooms.  Since then, there have been staggering 150 school shootings in the United States.

At the Sandy Hook Promise in Newtown, Hockley and her team hasn’t stopped in their crusade to teach children across the country that they have the power to prevent another tragedy by "saying something."  And it's worked.

“We’re educating a lot of people on how to recognize the signs of someone who is at risk of violent behavior,” explained Hockley.

It's a sensitive subject for children.  That's why the nationally known, ALICE Institute is now teaching kids in Kindergarten to 2nd grade, how to defeat "dangerous" intruders with a new picture book.

"I’m not scared...I’m prepared" explains how ants elude a coyote, by throwing things, making noises and running in a zig-zag pattern to escape.

“We have to be so careful what we tell. You can’t teach a child through fear,” said Gary Kamp, national trainer for ALICE, which stands for alert, lockdown, inform, counter, evacuate.

Since being published this year, teachers have read the book in over 600 school districts in the north east alone.

Still Hockley isn’t so sure, an active shooter drill would have saved her son, or anyone else. “I would rather the emphasis on how do we help identify someone how they could become violent to themselves or someone else.”

ALICE points out, that over 22-million people have learned about their training methods. Six schools have used the concept for survival in real-life scenarios.