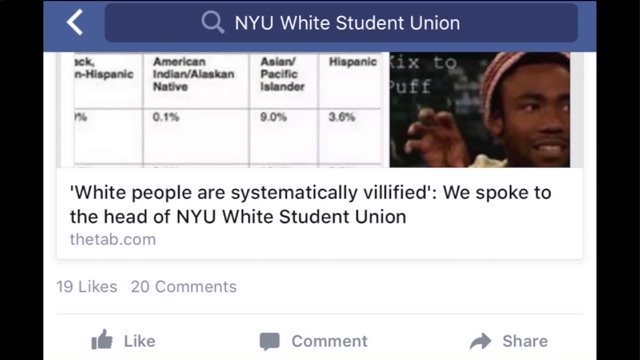 NYU authorities said there is no organization at the university under the name and are looking to shut down the page.

Similar pages have also appeared at other colleges across the nation, created by anonymous groups that are stealing the school's logos.

Some comments on the page are saying the whole group is a big joke, but not everyone is laughing.

"No, no this is not funny at all — I don't like it," parent Trisha Kramer said. She's taking her son on a NYU college tour.

The Kramers, from Phoenix, are visiting NYU with their son. They are considering it as a possible college for him to attend, but are not too happy about their first impression of the campus.

Many parents and student said the page is unnecessary.

"Who are the parents of the kids putting this together, what are these students thinking?" Trisha said.

NYU authorities said it insists this is not an official or non-official campus organization.

The University said it is the latest victim by an anonymous group ripping off its logo and pranking schools with these fake Facebook pages.

According to the page's organizers, the organization is not trying to promote hate. It's created to celebrate the white race and culture.

"I'm not joining so that's one less member. But at least this doesn't stop me from liking the university," Matthew said.

Only few students on campus have heard of the site when PIX11 asked them. The students said they do not know anyone who is part of the group.

The page is currently still up and generating a lot of likes.