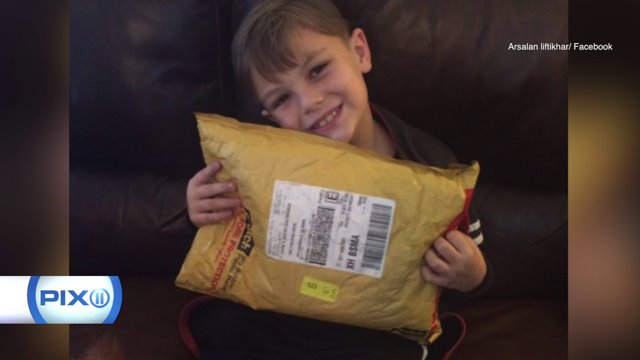 PFLUGERVILLE, Texas — A 7-year-old boy was rewarded in a big way after he donated all his money in his piggy bank to help pay for damages at the local mosque caused by vandals.

The Islamic Center of Pflugerville, a mosque in a strip mall in the suburbs of Austin, Texas, was vandalized on Monday, CNN reported. On the way to morning prayers, community members of the mosque found feces smeared on the sidewalk and torn pages of the Quran, the Islamic holy book, scattered outside the center.

When Jack Swanson heard about what happened, he wanted to do something to help his local mosque.

"We were talking in the car how someone smeared poop on their church, and that was a really, really awful thing to do, and we had a good conversation what churches are for and how everybody's churches are important," Laura Swanson, Jack's mother, said to CNN.

Jack scraped together the $20 he had in his piggy bank, went to the mosque and handed the donation to Islamic Center board member Faisal Naeem.

"It's 20 bucks, but coming from Jack collecting his pennies, it's worth 20 million bucks to me and to our community," Naeem said to CNN.

Arselan Iftikhar, human rights lawyer and author and editor of TheMuslimGuy.com, heard what Jack did and said it "brought tears to [his] eyes," according to his Facebook page. He started talking to Jack's mother and learned that Jack was saving up the money for a new Apple iPad.

So to thank him for his generosity and selfless act, Iftikhar sent Jack an iPad with a note saying:

You had saved $20 in your piggybank for an Apple iPad. But then a local Islamic mosque was vandalized. So you donated your $20 to this local Texas mosque. Because of your amazing generosity & kind heart, please enjoy this Apple iPad with our sincere thanks.

Swanson posted pictures of Jack with his new iPad and said he learned a big lesson in kindness — what goes around, comes around.

Local officials said they are investigating the mosque vandalism as a hate crime.