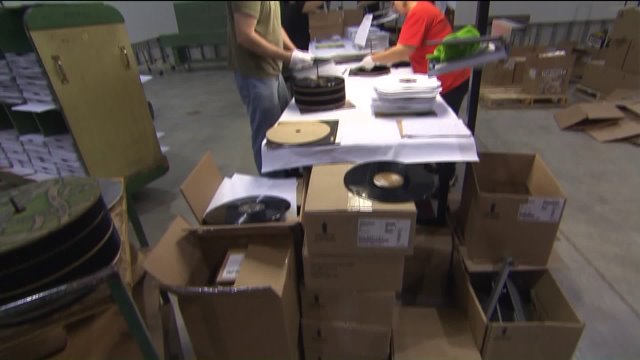 NEW JERSEY – A startup in New Jersey is getting in on the latest music boom: vinyl records.

According to a RIAA mid-year report, vinyl record sales beat digital music streaming by $60 million in the first half of 2015. That’s up 52 percent from last year. In the age of digital music, tangible media is having an undeniable heyday.

Independent Record Pressing opened its doors over the past year after a group of investors purchased six used vinyl presses from Canada and relocated them to a Bordentown, N.J. warehouse.

Sean Rutkowski had never worked in vinyl pressing prior to being hired as General Manager at Independent Record Pressing. He is leveraging twenty years of music industry experience, and had noticed a major change at his local record store.

"Ten years ago, it was all people my age. Now I go and see kids younger than my own kids in record stores," said Rutkowski.

Some 54 percent of today’s vinyl customers are under the age of 35, according to consumer group Music Watch.

“Hundreds of these machines were scrapped in the 80s. Literally, cut up and scrapped,” explains David Miller, the man responsible for keeping Independent’s presses up and running.

Rutkowski emphasized Miller as a sort of secret weapon in their company's formula for success. "If you talk to any pressing plant across country, their biggest challenge behind the machines is finding people to run the machines."

Miller comes with a unique resume. His parents and grandparents built some of the earliest vinyl press models. Miller spent his younger years  getting a first listen of some of the biggest names in music as they passed through his parents’ factory.

“At night my brother and I used to go into the sound room, we’d sneak into our parents factory,” Miller said with a grin. “We’d stumble across Disraeli Gears, Eric Clapton.”

Not much has changed in the way vinyls are made.

While digital music can release thousands of songs to millions of listeners within moments, a vinyl press produces a single record about every 30 seconds.

As he spoke, Miller paused intermittently to run over and finesse a knob or reach into the mouth of the machine to make a tweak. His mind was in sync with the machines.

Every individual vinyl gets the white-glove treatment as it is hand checked for scratches or flaws. It is then placed in a sleeve, wrapped, and shipped out to distributors across the country.

While Independent produces mostly indie artists, major music heavyweights like One Direction, Adele and Taylor Swift continue to show up in record stores. Today, Adele announced that her highly anticipated new album “25” will not be released on digital streaming. It is currently available on LP at Urban Outfitters for $25.

“It takes hundreds or thousands of digital downloads to equal the payback of a single vinyl for the artist,” Rutkowski said of the appeal to artists to keep the medium alive.

One young staff member at Independent waxed poetic about the appeal to younger listeners:

"You put on a record, and you have to be there listening to it and experiencing it, versus on your iPod where you put in your headphones and walk around and not focus on the music. With vinyl you focus on the music a little better."