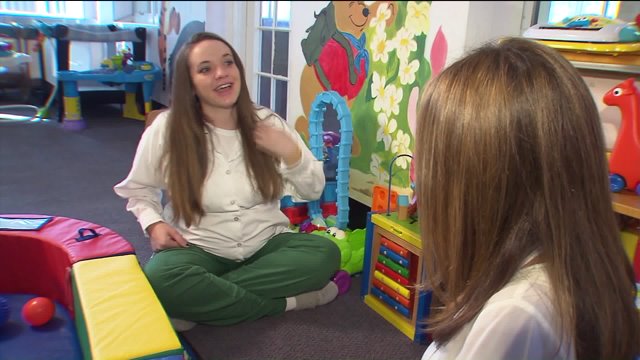 Every year thousands of women across the country are sent to prison while they are pregnant. Many will give birth and have to give up their babies to family or foster care.

But there are 10 states, New York included, where some inmates are allowed to keep their babies in a prison nursery program.

The oldest and largest program is at the Bedford Hills Correctional Facility in Westchester County.

One of the newest inmates there is Mackenzie Ryan. A 22-year-old from upstate New York, she was arrested for selling heroin. She found out she was pregnant shortly before she entered the maximum security women’s prison.

She said she sold the drug to feed her habit.

“An addiction, a drug addiction brought me here,” she said.

But she said she was clean when she became pregnant and as she struggled to stay drug-free. Going to prison pregnant was terrifying. She worried her baby would be taken away from her right after the birth.

However, Ryan said when she arrived at the prison’s nursery building, her prospects started to look up.

“I was a mess and they were very supportive,” she said.

Ryan was accepted to the nursery program because she is considered non-violent.

“Not all mothers get accepted to our program,” said Jane Silfen, the director of The Children’s Center at the prison.

The women who do qualify receive a pre-natal education, health care and once the baby is born, lessons on raising and caring for a child.

“A lot of the mothers we get, they are very excited about being on the nursery and they feel very optimistic about being able to have their babies with them while they are here,” Silfen said

Not every woman makes it through the program. Inmates have been sent back to the general population and their babies were sent home. But the goal of the prison program is to help these women succeed as mothers when they are released. as well as function as upstanding members of society.

“A lot of our mothers use this as a real wake up call,” Silfen said.

Studies have shown that women involved in nursery programs have a much lower rate of recidivism than women in the general prison population.

Ryan is due in late December. She’s already named her baby Kaylene.

According to Bedford Hills Correctional Facility, babies must leave when they turn 1, unless the mother is expected to be released soon after. In that case, a baby can stay up to 18 months. That’s what Ryan is counting on. If she does everything right, she will be home with her baby in July 2017.