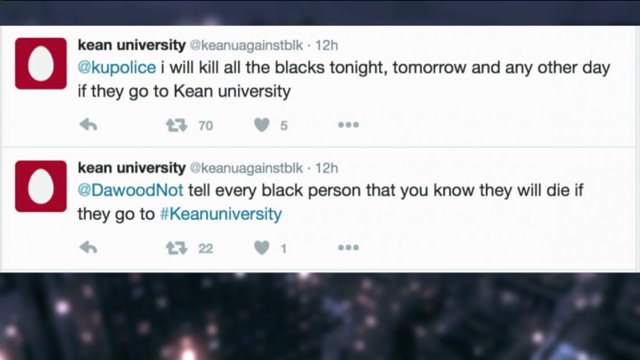 UNION, N.J. – Kean University police are investigating a series of tweets from a user who threatened to specifically shoot the school's black students.

Campus security updated students in Facebook post  Wednesday morning, notifying students that "violent threats were made anonymously on Twitter against Kean’s black community as well as to the campus at large." Kean University initially sent out an alert on Twitter late Tuesday night.

The threats were made last night during a peaceful rally on campus of racial unrest on college campuses across the county, Kean said.

The account, @keanuagainstblk , was created late Tuesday. In several tweets, the account threatened to “kill” or “shoot” black people at the school.

According to school officials, they took immediate action in trying to apprehend the culprit and involved the Department of Homeland Security, state, county and local municipalities as well as providing heightened security on campus.

Students shared screenshots from a Twitter account that posted threatened messages overnight. Those students urged their classmates and friends not to go to campus.

Wednesday classes will be held as scheduled, however, schools officials have left the decision to attend class up to the students.