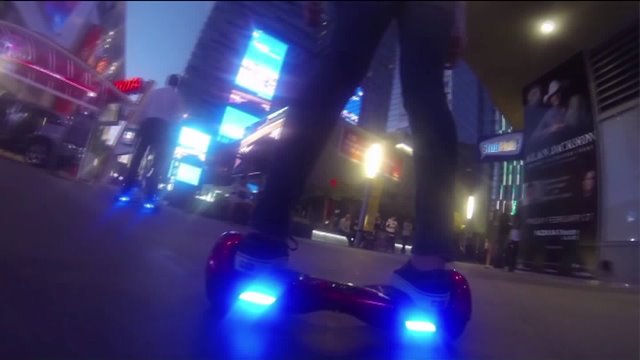 NEW YORK — They’re the must-have gadgets of 2015. Those zany, futuristic so-called hoverboards that let just about anyone glide across the city seamlessly.

However, now the fun police — also known as the NYPD — are pulling the plug on the popular hoverboard.

According to a tweet pushed out earlier in the week by the 26th Precinct, the hover board is illegal as per NYC Admin Code 19-176.2.

Code 19-176.2, though, defines the said motorized scooter as having “handlebars” and “capable of exceeding fifteen miles per hour.”

It doesn’t really apply to the hoverboard because it doesn't have a handlebar and travels 6 miles per hour.

According to Nunez, new technology brings inevitable regulation in some form or another.

While the law is just a tad ambiguous, the NYC Department of Transportation does not mince words when it comes to the hoverboard.

Clarifying in a statement that the New York State Vehicle and Traffic Law “requires all motor vehicles to be registered with the NYS DMV,” if they cannot be registered “they are not permitted.”

Therefore the hover board is illegal.

“Do I think this will deter people from buying hover boards? Probably,” Nunez said.

“To me it appeared to be a fad anyway. You know this isn’t a long lasting technology. We’re not going to be using these things to get to work any time soon.”

According to reports, if you get busted for riding a hoverboard on a New York City sidewalk, you could be facing a fine of up to $500.