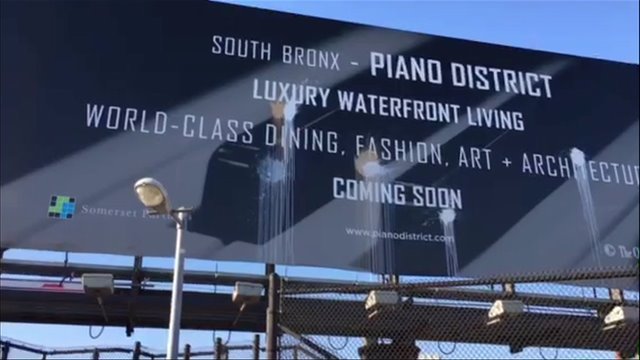 SOUTH BRONX — Ask just about any Bronx resident and they’ll tell you the waterfront of the borough facing Manhattan is and will always be known as the South Bronx.

However, if you noticed a recently erected billboard along side the Third Avenue bridge, the South Bronx is now apparently The Piano District.

That’s according to two developers who will soon be moving into the neighborhood.

Somerset Partners and The Chetrit Group will be raising a $58-million residential complex along the waterfront that promises to bring world-class dining, fashion and art to the borough among other things.

“This can be the beginning of the end,” Bronx native Samuel Maldonado told PIX11 News.

The effort to re-brand the neighborhood without residents’ consent has advocates like Maldonado crying foul.

“Honestly I think it was a disrespect to those who are Bronx natives, and Bronx bombers,” he said. “We’ve been here for years and for them to just come in and take over our land its like, its bad man.”

It’s the same sentiment shared by Jessica Clemente, President of Nos Quedamos, a non-profit community coalition in the Bronx who says residents were blind sighted by the hostile takeover.

“Our community has always been subject to be taken over as if we haven’t been doing enough on our own on the ground,” an impassioned Clemente said. “Our community is not empty. We are very viable which is what’s attracting them here in the first place. “

While campaigns and hashtags take flight to fight back against the developers in the middle of the controversy, advocates like Maldonado are on a mission to raise awareness.

The poet is organizing an upcoming meeting that has been met with some backlash where critics accuse the movement to have racist undertones, calling a flier promoting the event “anti-white.”

Somerset Partners and The Chetrit Group did not immediately respond to PIX11's request for a comment Monday.