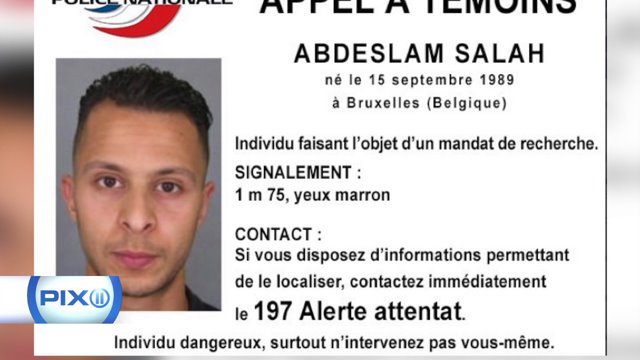 PARIS -- French officials are searching for a Belgium-born French national who is one of three brothers suspected in the Paris terror attacks.

The notice, released Sunday evening, is for Salah Abdeslam, a 26-year-old man born in Brussels. It warns people who see him that he is dangerous, saying "do not intervene yourself."

Investigators haven't said much about how they believe Abdeslam is tied to Friday's series of shootings and explosions in the French capital.

Jean Thoreau, a spokesman for Belgium's Federal Prosecutor, said Abdeslam is one of three brothers suspected of involvement in the attacks. One of the brothers was killed in the attacks, and another was arrested by Belgian police, Thoreau said.

Meanwhile, the death toll has risen to 132, according to news agency Agence France-Presse, citing hospitals. At least 352 people were wounded, many of them seriously.

Investigators are working around the clock. The Islamic terror group ISIS has claimed responsibility for the slaughter.

Reflecting just how nervous Paris is right now, a panic broke out Sunday evening in a crowd gathered at a memorial erected at one of the sites of Friday's terror attacks.

Video showed mourners suddenly spooked, though it's still unclear why. People ran away screaming. Some jumped over lit candles of the memorial, others grabbed their children and sprinted away. The panic ended quickly and police have cleared the memorial, saying no one is allowed to gather, at least for the time being.

It's possible that suspects directly involved in Friday's Paris terror attacks remain at large, a French counterterrorism source close to the investigation told CNN on Sunday.

A number of arrests linked to the attacks have been made in Belgium, but it is unclear whether they include the occupant or occupants of an abandoned car with weapons inside found in eastern Paris, the source said.

Identities of several attackers emerged Sunday, but many details about who was behind the attacks -- and why -- remained unclear.

At least one of the terrorists apparently entered the European Union hidden among the wave of refugees arriving on European shores.

European officials believe that there is "a very professional new squad of terrorists inserting themselves into some of these migrant voyages," CNN's Christiane Amanpour reports.

One of three bombers who detonated themselves at the Stade de France late Friday arrived on the Greek island of Leros on October 3 among numerous Syrian refugees, Amanpour reported, citing an unnamed French senator who was briefed by the Ministry of the Interior.

The man declared himself to be Syrian, said his name was Ahmad al Mohammad and was, under new procedures set up to help refugees, issued a new emergency passport or similar document.

From Leros, he traveled to Macedonia, Serbia and then Croatia, Amanpour reported.

The fingerprints from the bomber at the Stade de France match those taken when the man was issued his emergency travel document on Leros.

Bilal Hafdi was one of the attackers in Friday's terrorist attacks in Paris, according to several sources. Hafdi, who was killed in the attacks, was a Belgian resident who was 19 or 20, the sources said. He is thought to have fought in Syria, Belgian terror expert Guy Van Vlierden said.

One of the suicide bombers has been identified as Ismael Omar Mostefai, according to Jean-Pierre Gorges, the mayor of the French town of Chartres, who is also a member of Parliament. Mostefai lived in Chartres at least until 2012, Gorges said in a Facebook post Saturday.

Investigators in France and elsewhere continue to make arrests of people who may be linked to the Friday night assaults that killed more than 120 people in gun and bomb attacks across Paris.

The French channel BFMTV, a CNN affiliate, reported that authorities had found three Kalashnikov automatic rifles in an abandoned car in the eastern Paris suburb of Montreuil that was believed to have been used by perpetrators of the attacks.

At least seven people have been arrested in raids in Belgium connected to the Paris attacks, officials said. Those arrested were in contact with the Paris attackers, a senior Belgian counterterrorism source told CNN. No weapons or explosives were found on them.

Two attackers have been identified as French citizens who lived in the Molenbeek district of Brussels, according to Thoreau, the prosecutor's spokesman.

But officials are still trying to figure out who the assailants were and how they planned and carried out near-simultaneous massacres at restaurants, bars and a concert hall in the French capital without being detected beforehand by intelligence agencies.

One of the suicide bombers has been identified as Ismael Omar Mostefai, according to Jean-Pierre Gorges, the mayor of the French town of Chartres, who is also a member of Parliament. Mostefai lived in Chartres at least until 2012, Gorges said in a Facebook post Saturday.

One attacker identified as French

The news agency Agence France-Presse reported that Mostefai was the same attacker who was described Saturday by Paris prosecutor Francois Molins, something CNN has not confirmed independently.

Molins, who did not identify the attacker by name, said he was a 29-year-old French citizen with a criminal record from the southern Paris suburbs.

The attacker was involved in the assault and hostage-taking at the Bataclan concert hall, where the highest number of people were killed Friday, according to the prosecutor.

The man, who was identified by fingerprints, was believed to have been radicalized in 2010 but had never been accused of terrorism, Molins said.

Agnes Thibault-Lecuivre, the Paris prosecutor's spokeswoman, told CNN that six people -- all family relatives of Mostefaï -- have been detained.

It is common practice in criminal cases in France to place family members in custody. Mostefaï's relatives have not been charged or arrested.

As investigations into the attacks gathered speed over the weekend, authorities detained people in France and Belgium.

In Belgium, raids were conducted in a Brussels suburb, Justice Ministry spokeswoman Sieghild Lacoere said. A car rented in Brussels was found near one of the sites of the Paris attacks, which triggered the raids, Lacoere said.

Some of the Paris attackers were also known to Belgian intelligence, the source said.

Also Saturday, CNN affiliate BFMTV reported that the father and a brother of one of the attackers had been taken into custody. And AFP reported that the two men were detained after police raided their homes 130 kilometers (80 miles) east of Paris. CNN has not independently verified that the men were picked up by authorities.

A man who rented a VW Polo used by terrorists at the Bataclan was intercepted at the border with Belgium, according to Molins, the Paris prosecutor. The man, who was driving a different vehicle when he was caught, is a French citizen living in Belgium and was accompanied by two other people, Molins said.

"The skies have been darkened by the horrific attacks that took place in Paris just a day and a half ago," U.S. President Barack Obama, in Turkey for a meeting of the G20 group of countries, said Sunday in a joint media appearance with Turkish President Recep Tayyip Erdogan.

"As a NATO ally, we have worked together to bring about pressure on ISIL even as we also try to bring about a political transition inside of Syria that can relieve the suffering of so many people and eliminate the environment in which ISIL can operate," Obama said. ISIL is another acronym for ISIS.

The G20 leaders are expected to focus largely on terrorism in the wake of the attacks in Paris.

French President Francois Hollande has called the shootings and bombings, some of which targeted an international soccer game he was attending, "an act of war." He has vowed merciless revenge on ISIS, which France is already bombing in Iraq and Syria as part of the U.S-led coalition against the militant group.

The French government has declared a state of emergency and announced three days of mourning for the victims of Friday's bloodshed.

But many leaders seem to agree that Friday's attacks in Paris mean the threat to many Western countries has increased.

In the UK on Sunday, British Home Secretary Theresa May is set to chair a meeting of the Cobra crisis response committee in London. Prime Minister David Cameron is in Turkey for the G20. Cobra meetings are held to discuss urgent security matters and include senior figures from the British government and heads of intelligence and security agencies.

The violence that hit six different sites around Paris has deepened the trauma for Parisians, who had already been shaken by a series of terrorist attacks in January that left 17 people dead.

People were still out around the city Saturday, some posing for selfies along the Seine or stealing a kiss in front of the Eiffel Tower. But the tower itself -- like many other tourist attractions, shops and public buildings -- has been closed in the aftermath of the attacks.

Fears the terror isn't over

Security has been stepped up, with military reinforcements drafted in.

There has been an outpouring of support and solidarity in Paris, but large gatherings in the streets have not materialized, partly because the state of emergency prohibits them.

"We don't know yet if this terror in fact is over or not," he told CNN, highlighting the jitters caused by unsubstantiated rumors circulating on social media.

In addition to the 129 people killed in Paris, 352 were injured, at least 99 seriously, Molins said Saturday.

Seven of the terrorists were killed, mostly by blowing themselves up, according to French officials. The attackers are believed to have operated in three teams.

U.S. officials say they are waiting for corroboration from DNA and fingerprint tests to help positively identify the attackers, something that will take some time.

The FBI is running through databases an initial batch of names that could be those of the attackers or people associated with them, according to U.S. law enforcement officials. So far none of those names are known to the United States as terrorism suspects, the officials said.

The scale and coordination of Friday's wave of deadly assaults inside a major Western city -- coming soon after ISIS' claim of taking down a Russian airliner in Egypt -- appear to represent a deeply disturbing increase in the extremist group's capabilities.