‘An act of war:’ ISIS claims responsibility for Paris attacks that killed more than 120 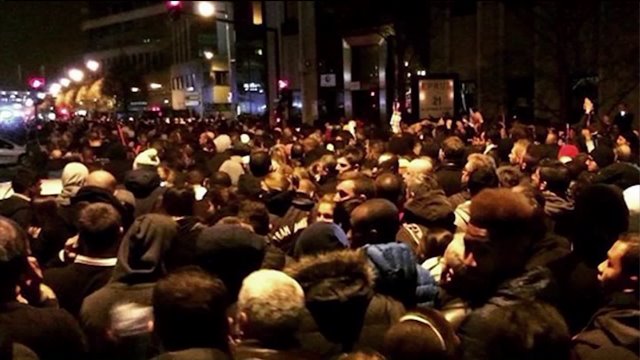 PARIS – Terrorists struck six locations in Paris with gunfire and explosions, killing at least 127 people and seizing hostages in yet another massacre in France this year.

Meanwhile, police officials say a Syrian passport found on body of one suicide bomber at the Paris stadium.

In addition to the fatalities, 180 others were injured, according to the Paris Police Prefecture. More than half of the injured are in critical condition.

The Paris Prosecutor initially said at least 153 people had been killed but that number has been revised.

French president Francois Hollande said the Islamic State group is behind the worst attack on France in decades and called it “an act of war.”

Not long after Hollande blamed it on ISIS, the terrorist organization claimed responsibility for the Paris attacks in an online statement.

It occurred Friday night as residents and tourists reveled in bars and restaurants.

One of the targets was near a soccer match as France played world champion Germany. Terrified fans huddled together and streamed onto the field after the blasts . Others hugged.

At the Bataclan, a concert hall where most of the fatalities occurred, fans were listening to American rock band Eagles of Death Metal when gunfire erupted.

“People yelled, screamed,” said Julien Pearce, who was there. “It lasted for 10 minutes. Ten horrific minutes where everybody was on the floor covering their head.”

Hollande vowed to hunt down the terrorists, whom he referred to as “barbarians.”

“We will lead the fight and we will be ruthless,” Hollande said. “… When the terrorists are capable of doing such acts, they must know that they will face a France very determined.”

Eight terrorists are dead following the attacks on six locations in Paris and nearby areas, prosecutor’s spokeswoman Agnès Thibault-Lecuivre said.

The prosecutor’s office said it cannot confirm whether all terrorists have been killed because it has not determined the total number of attackers.

Of the eight, seven died in suicide bombings, officials said.

The attackers targeted a concert hall, a stadium, restaurants and bars.

Most of the deaths were inside the Bataclan concert hall, where a witness said gunmen stormed in firing rifles and shouting “Allah akbar.” At least 112 people died in that attack.

“We lay down on the floor not to get hurt. It was a huge panic,” Pearce said. “The terrorists shot at us for 10 to 15 minutes. It was a bloodbath.”

The gunmen seized hostages before French police stormed in and rescued 100 people.

Michael Dorio, brother of Eagles of Death Metal drummer Julian Dorio, said he spoke to the musician after the attack.

Dorio said when his brother and his bandmates heard the gunshots, they stopped playing, took off backstage and exited.

Charlotte Brehaut and a friend were dining at a Cambodian restaurant in Paris, she said.

"All of a sudden, we heard huge gunshots and glass coming through the windows," she said. "We ducked with the other diners."

At least 14 people were killed at the Le Petit Cambodge restaurant, authorities said.

In addition to the Cambodian restaurant, four people were killed in the tenth district of Paris. Four others died on Avenue de la Republique, also in the 10th district of the French capital.

Nineteen people were killed outside La Belle Epuipe bar in the eleventh district of Paris.

Some explosions hit near the Stade de France outside Paris, home of the national sports teams. Four people died in those attacks, authorities said.

One of the blasts appears to be a suicide bombing, a Western intelligence source told CNN.

Three suicide bombers died in the blasts. A dismembered body consistent with the aftermath of an explosion from that type of device was found at the scene, authorities said.

President Barack Obama spoke to Hollande and offered him support and condolences. The FBI and the Department of Homeland Security are closely monitoring the situation, but there is no credible or specific threat in the United States, a U.S. government official said.

"The two leaders pledged to work together, and with nations around the world, to defeat the scourge of terrorism," the White House said in a statement.

German Chancellor Angela Merkel said the attackers hate freedom, and vowed her nation will help lead the fight against terrorists.

Following the attacks, the New York Police Department increased security but stressed there is no credible treat to New York or the United States.

Throughout the globe, people showed off their support for the French city using the hashtag #PrayforParis or #Pray4Paris.

Additionally, major monuments worldwide were lit up in colors of the French flag, including the Empire State Building and One World Trade Center. However, as the night went on, some turned pitch black in mourning of those lost.

In New York City, hundreds gathered in Union Square for a candlelight vigil. There, dozens of French students sang the national anthem in solidarity with the victims.

Two attackers, who were brothers, said they wanted to punish the magazine for the publication of cartoons that they believed mocked the Prophet Mohammed. Two days later, the brothers were shot to death in a standoff with police in Dammartin-en-Goele.

Their associate attacked a Jewish grocery store in Paris, taking more than a dozen people hostage and killing four. Police stormed the kosher market and killed him.

In an address to the nation following Friday's attack, Hollande declared a state of emergency and said border security has been ramped up.