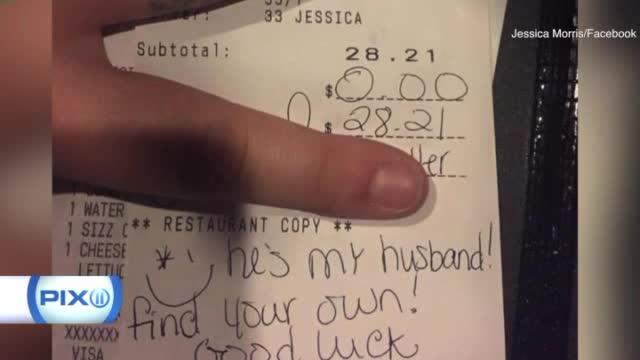 CENTERVILLE, Ohio — A server at a restaurant in Ohio has some tough words for a newlywed who refused to leave a tip after enjoying a meal with her husband.

The server, Jessica Morris, is also a newlywed and had just married her husband, Travis, on Oct. 9. After their honeymoon, the happy couple returned to their jobs as servers at the restaurant.

On Saturday, Jessica wrote that she was serving a couple who were also newlyweds and were celebrating their honeymoon. At the end of the evening, Jessica says she dropped off the couple's check and assumed everything was fine. When she returned, the couple had disappeared and left her a little note with a $0 tip.

After returning home, Jessica posted an open letter addressed to the woman who identified herself as "Jenny."

*WARNING LONG READ AHEAD, BUT ITS A GOOD ONE AND A PSA FROM ALL SERVERS*

I don't typically talk about work this way, but this needs to be shown/addressed. Mainly because it's hysterical but partially because I'm offended lol

Anywho, today I had a table of 4 come in. Two couples. The one told me they were there to celebrate part of their honeymoon, which I replied "oh I just got married last month, congratulations." I assumed they heard me, and we proceeded with the whole "what can I get you" yada yada yada.

Well, as anyone SHOULD know, waitressing is a personable job. To make money you have to be nice, and show you personality. As all of you should know, since you know me, I'm a personable, sarcastic a**hole in the nicest way possible. So ofcourse I let that shine in my job, and at EVERY table.

So, this lady (Jenny) and her husband place their order and she asks me what my name is. I tell her "Jessica" she responds with, "oh, we don't really like that name. Can we call you Jess" and I laughed and said "yeah, you can call me anything you want. I'll even respond with a**hole." In which her husband laughs and proceeds to call me that throughout the whole experience we had as server and guests.

I assumed everything was fine, because they were laughing and having a good time. Well I cash out their check, tell them have a good night and to come back. When I come back from singing "happy birthday" to another guest, the couple and company have left, and on one ticket they tipped me $4, well Jenny decided I did not deserve a monetary tip, so she wrote me a nice note, with a $0 tip saying "he's my husband, find your own. Good luck. :)  "
And I want to add, Jenny stole my one pen, which she knew was my last because I had apologized that I only had the one to share between the two tickets at the table.

So, Dear Jenny,
I would like you to know, the server that was in the section across from mine, that I kept talking to and checking on throughout the time of you sitting at my table IS MY HUSBAND. Which I found on my own, and looks better than yours. Also, I would like you to know that I'm sorry MY HUSBAND treated me to a cruise for my honeymoon and not a restaurant. As well as, MY HUSBAND would never let me feel so insecure that I would feel the need to write such a terrible note to a server and make them feel the way you have.
So Jenny, here's a life tip for you from me, your insecurity as a woman is heartbreaking. Have pride in yourself and your relationship with YOUR husband to where you don't need to put another down to bring yourself up. Especially a server who lives off her tips and needs them to help her husband pay bills. Also, Jenny, I hope you like the pen, because it's my present to you. One NEWLYWED to another.

P.S - my husband said you can sit in his section next time that way you won't have to be so worried about your husband "flirting" with a server :). Maybe you'll see his ring a little better than you saw mine.

Signed, Jessica
The woman you offended by thinking so lowly of, that I would attempt to flirt with a man who is with his wife.