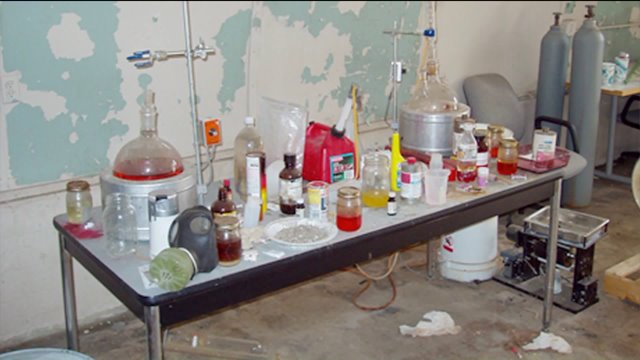 NEW YORK, NY – As the synthetic drug crisis continues to rage, another new chemical cocktail is proving deadly across the country and its known as flakka. But the fight against these $5 deliriums is just beginning.

Its effects are dizzying, delusional and deadly.

“This is poison. No different than taking rat poison,” warned James Hunt, Special Agent in Charge of the New York DEA field office.

It’s manufactured in China and India and can be bought online. Experts caution the drug fuels the user’s body with a feeling of superhuman strength. Purchased for just $5, it’s similar to bath salts.

Florida has been ground zero for flakka, where one man was caught on camera kicking down a door to police headquarters in the southern portion of the state. Now, the Drug Enforcement Administration has tracked its troublesome movement to upstate New York, in Buffalo and Syracuse.

The New York field office of the DEA has been battling a synthetic drug craze not seen in years and has been especially rampant in the Bronx and East Harlem.

The synthetic drug scourge has gotten so bad in New York City, that hospitals are admitting about 150 patients every week. Emergency room visits have increased tenfold, since last year.

Flakka is Spanish slang meaning “enticing woman” and the drug mimics methamphetamine and is a copycat of cocaine. But these enticing chemicals, like many synthetic drugs, are silent killers and tend to go undetected in autopsies.

“When you bring your baby home from the hospital you don’t envision their life being cut short from a packet of poison,” New York mother Deirdre Canaday said.

Her son Aaron Stinson was just 26 years old when chemical cannabinoids took his life in 2011. Canaday is now making it her mission to end this epidemic in her home state, warning “synthetic drugs are the wave of the future.”

With chemical recipes often evolving, legislators in New York and New Jersey are working to outsmart crooked chemists with proposed legislation, which has not yet been passed.

“We’ve got a big drug problem in New Jersey and we want to exclude [flakka] for them," Eustace said. "As quick as we make the laws, the chemists can make new versions of the drug.”

Until then, Canaday and law enforcement are warning other parents, in hopes of educating them about all synthetic street drugs: “You’re really playing Russian roulette,” said Hunt.

Since flakka is illegal federally, law enforcement is pushing to get the chemicals banned in China, as well, in an effort to limit its supply.