Dozens of CUNY employees arrested during protest at school headquarters 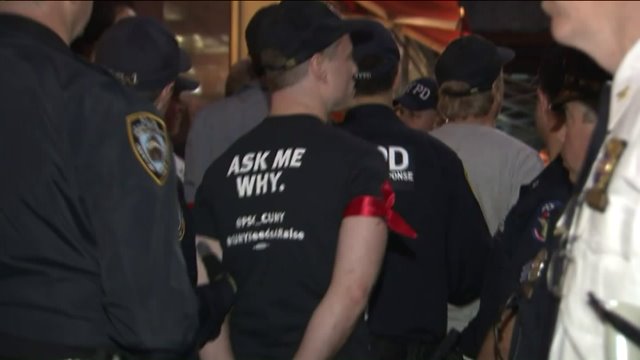 NEW YORK – Hundreds of full-time and part-time faculty members protested outside the Manhattan CUNY headquarters, and dozens left with their hands zip-tied behind their backs.

Union officials who gathered along East 42nd Street Wednesday say they have been working without a contract for five years and haven't received a raise for six years.

The union – PSC-CUNY – represents 27,000 staffers.  Among those arrested was PSC-CUNY President Barbara Bowen, who was quoted on the union Twitter page saying, "Our action 2day is part of a long struggle for racial & edu'l justice."

CUNY offered a 6% raise that would be part of a six-year contract.

"The dedicated faculty and staff of The City University of New York are key to preparing an educated citizenry and workforce for the City and State of New York and it is important that we reach agreement on a contract long out of date," the school said in a statement.

As of Wednesday evening, the union would not accept the deal.