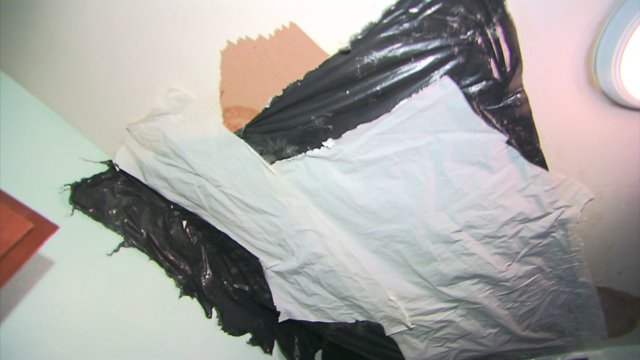 NEW YORK – For many months, Sydia Limehouse  says she had been complaining to the New York City Housing Authority (NYCHA) about the leak in  the  kitchen of the apartment  she and her  daughter live in at West 176th street.  She claims the building management ignored her complaints and eventually the water leak formed a huge bubble in her kitchen ceiling.  Sydia says, “I said to them there’s a bubble and it's gonna explode. Its gonna come down. They said they were gonna send someone. No one ever came.”

A few months ago, the bubble burst  and the ceiling came  crashing down.  Sydia says there was sheet rock and water all over her kitchen. It turns out the water leak came from the apartment above, from an improperly connected washing machine. NYCHA says since the upstairs tenant owned the machine, it was that tenant’s responsibility to hire a plumber and fix the leak. That took over a month.

In the meantime, Sydia was told not to use the stove or washing machine in her kitchen until her ceiling could be repaired. Right now, the holes in  the ceiling are covered with tape and there have been no repairs made to her ceiling.   So, she says, she and her daughter have been eating out a lot. In the three months since the ceiling collapsed, she claims to have spent over 600 dollars in restaurants.

Sydia says she has spoken with the manager about a timetable to repair her ceiling and “he told me I have to wait for an appointment . I just have to wait because he has to get approval from the borough office for him to okay the repairs”. A NYCHA spokesperson told PIX11 “NYCHA staff will continue to work with the resident to gain access to her apartment in order to complete the repairs to her ceiling as soon as possible.  Sydia says, “This is embarrassing. This is horrible”.

It’s also shameful and we’ll stay on top of this story until it is resolved.