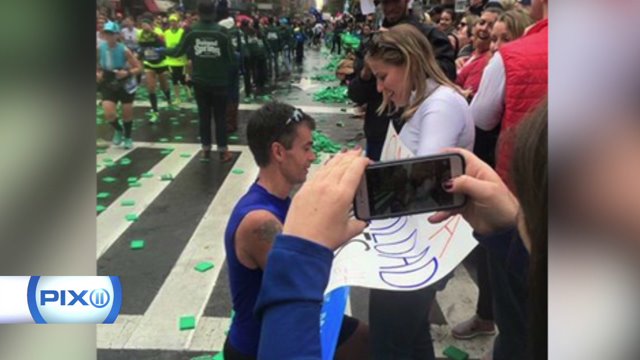 UPPER EAST SIDE — Are you the woman in blue?

A newly engaged couple is trying to find one of the thousands of spectators who cheered on the runners at last weekend’s New York City Marathon – because she has, quite possibly, the perfect picture of their engagement.

Katie Mascenik was on the sidelines near Mile 17 waiting for her boyfriend, Joe, to come running past when he pulled over, bent down on one knee and pulled out a ring, her sister Kristen Mascenik Celecki said in a Facebook post.

It happened at the corner of First Avenue and 77th Street, Celecki said.

And while the couple’s friends and family snapped pictures of the romantic moment, they didn’t get the perfect shot. A total stranger did – and her cellphone blocked Joe putting the ring on Katie’s finger.

“As you can see … the woman in blue got a great picture and the man in the black hat may have as well. We didn't get any clear ones and are hoping someone can help us track one down,” Celecki said, posting a picture to Facebook and asking those who see it to share the post.