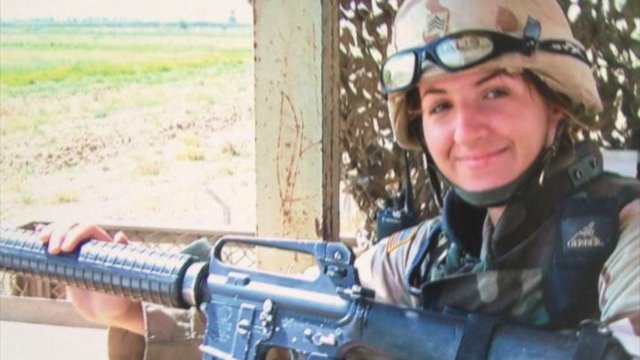 THE BRONX — "My whole life I've been proud of doing service for people.  So in the military I was providing service and now in the medical field that's what I do," said veteran Katina Tsahalis.

Sgt. Tsahalis  is a first-generation American who grew up in the Bronx. She joined the Army in 2000 for the education benefits, but says she got another education serving our country.

"A lot of life experience and I think it prepared me for my job that I do today in the medical field, especially during stressful situations."

Sergeant Tsahalis served five years in the U.S. Army including a 12-month deployment in Iraq in 2004. During that tour she setup communications for the commanders and battalions and led humanitarian missions providing school supplies to local students.  But during those missions her unit was often under enemy fire.  Frequently they were mortared 10 to 20 times a day.

At first she says transitioning back to civilian life took a little getting used to.

"Sometimes it's hard.  It's difficult to watch movies, especially very realistic movies is kind of difficult.  And I find a lot of veterans are suffering from PTSD."

Today Tsahalis serves her patients as a physician assistant at Mount Sinai Brooklyn.  Although not a patient, one person she looks after is fellow Veteran Rocco Moretto.

"I think most veterans share that bond because even though we're in different wars, he's World War II and I was in the Iraq wars, our stories are kind of similar."

And she says listening to those stories and appreciating that service is the best way to honor our Veterans this and every Veteran's Day.