See how Smarties candy company carries on its sweet legacy — and takes Halloween off after 9-month prep! 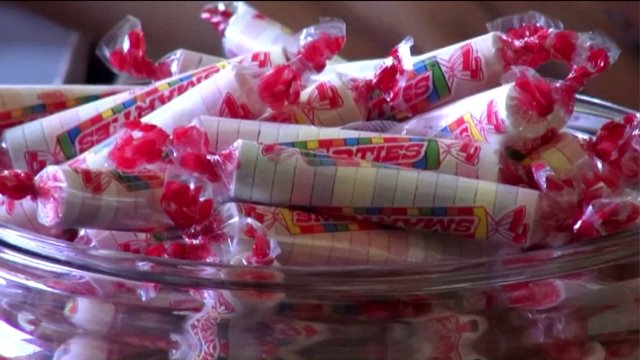 UNION, N.J. — Even on the outside, the smell of sugar is in the air. Inside, the third generation of a candy family continues to meet high demand for the nostalgic plastic rolls of Smarties candy.

“It still amazes me when I meet people, that not only do they enjoy smarties but their parents did and their grandparents did as well,” said Liz Dee, whose grandfather immigrated to the United States in 1949, armed with two candy-making machines.

“These machines were repurposed gunpowder pellet presses from World War II. And he used that technology, obviously altered it quite a bit, to make what we know of as Smarties today.”

Edward Dee, a third-generation candy-maker himself, still comes to work almost every day at age 91. Dee initially delivered the little multi-colored rolls to local stores himself. Known then as Ce De Candy, the company’s name was eventually swapped for their most popular product name. Over the years the company’s address has changed several times, from Bloomfield, New Jersey to Elizabeth and finally Union, but the family is committed to keeping the business in the Garden State.

“It’s in our blood to be here in New Jersey making candy here,” said the younger Dee.

But today, all was quiet in the factory. The roughly 100 people employed at their Union facility were all sent home early, with 15 pounds of candy each. The company is celebrating that their ninth-month preparation for Halloween is over. Their factory produces roughly 1 billion rolls of Smarties every year, plus the company has a second factory in Canada.

Today, sisters Liz and Jessica, along with their cousin Sarah Dee carry on the candy legacy their grandfather built.