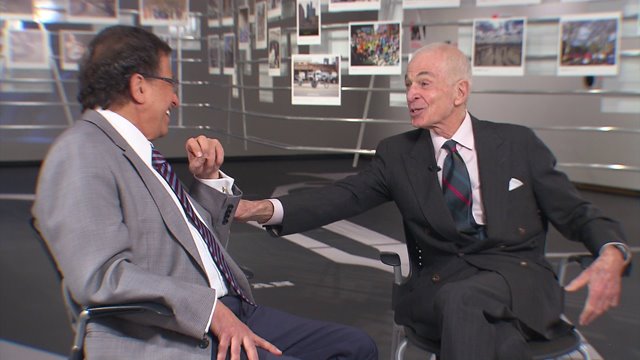 In this week`s "It`s a "G" Thing, PIX11`s Mr. G sits down with NYC Marathon co-founder, George Hirsch, and talks history. Gets tour of new exhibit.

“It’s a magical day for me!” George Hirsch smiled.

Magic George Hirsch says can only be felt during the New York City Marathon.

But he was more than just a participant, he helped create it.

“Here came this idea, this incredible idea, shut down the city and run a race through the five boroughs,” he remembered.

Hirsch, Fred Lebow and George Spitz teamed up and ran with it.

“This was 1976, the city was on the edge of bankruptcy, crime was high it was a tough time," Hirsch explained. "We convinced Mayor Bean, with the help of Manhattan Borough President Percy Sutton [that] the marathon might help uplift this city.”

He agreed. The next task was finding the money to actually make it happen.

"The Rudins, Jack and Lewis Rudin, came up with the first money, $25,000," he said. “Charlie McCabe, from Manufacturers Hanover, they put up money so they have Manufacturers Hanover [on the bibs.] Bill Rodgers trimmed everything off around his number, like most runners did to shave off any time. And so he crossed the finish line and his picture was on the cover of the New York Times and the next morning I get a blistering call," he laughed.

Nearly 40 years later, it's the biggest and most prestigious footrace in the world. I've competed in 31 of them and just like everyone, the memories are endless.

“The year Fred ran the marathon with cancer with Greta, I was part of the entourage,” I remembered. “There was one point when Freddie goes like this, [starts swaying] and as soon as we stopped and walked over to him, Freddie took off," I laughed.

And its stories like this that make the new exhibit at the Museum of the City of New York so special.

“You can expect to see the New York city marathon as a great civic event,” Sean Corcoran, exhibit curator, said. "We wanted to show some of the most important runners in its history, but we also wanted to have profiles of common runners who have shown strength and overcome adversity.”

From pictures and videos of the runners, the spectators, the police and the volunteers, this place tells a story.

“We had an open call for pictures," he explained. "We were fortunate enough to have more than 3,000 photographs submitted for this exhibition and we had it get it down to about 130 pictures.”

You can see the excitement, the agony, the appreciation and for me it mimics life. It has a start and an end an everything in between has highs and lows. You just try to do your best and relish in the fact that you were part of it.