Police clash with ‘Rise Up October’ protesters in Times Square 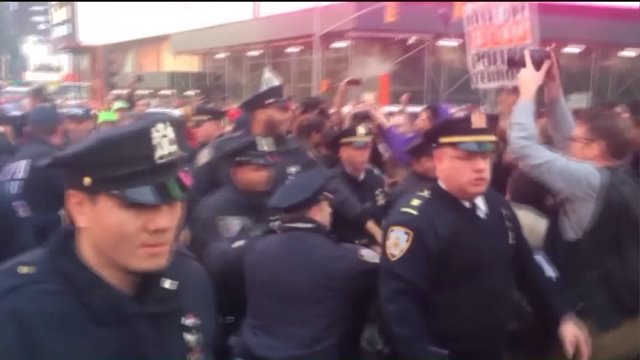 Thousands marched from Washington Square Park to Bryant Park Saturday afternoon to call for change when it comes to police-involved deaths. According to the event's website, the march is described as being "peaceful and determined."

Around 6 p.m., photos and videos surfaced on social media showing unrest between police officers and protesters.

First arrest at #RiseUpOctober march. She says NYPD smacked the phone out of her hand. pic.twitter.com/e3xoSDDPR2

#nypd decide that #RiseUpOctober is not allowed even in the pedestrian area of Times Square #BlackLivesMatter pic.twitter.com/IEa7CIgBWG

By Saturday evening, several people who were detained left the 7th precinct without being charged. Their friends were seen behind barricades waiting outside of the precinct.

Earlier in the day, the march remained peaceful with celebrities including Quentin Tarantino joined demonstrators at the rally.

Quentin Tarantino is out here with #RiseUpOctober.. But where are the prominent black celebrities? pic.twitter.com/AVZUnFGFWU

Saturday's march comes after protesters gathered by Rikers Island demanding the prison be shut down.

Police are expected to release a tally of how many arrests were made.

This is a developing story; check back for updates.