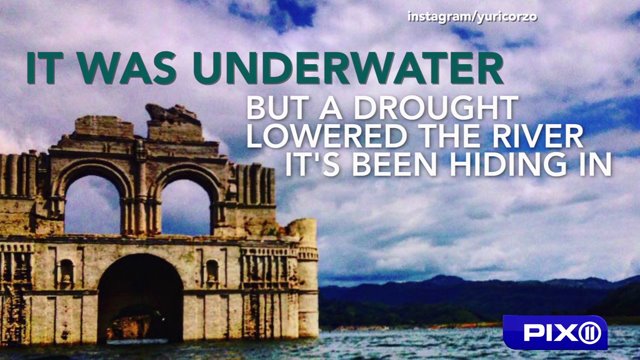 MEXICO CITY — Receding waters at a Mexican reservoir revealed the remains of a colonial-era church that hasn't been seen in over a decade.

A drought caused water levels to drop in the Nezahualcoyotl reservoir by 25 meters, according to the Associated Press. The low water levels revealed the remains of a church, known as the Temple of Santiago, that was built in the mid-16th century by a group of monks.

The church, located in Quechula, stands 48 feet tall at the highest point of the bell tower, with surrounding walls reaching 30 feet tall. It was abandoned in 1770s because of the plague. In 1966, the church was underwater after a dam was built in the Grijalva river.

Locals have been visiting the remains and capturing the rare sighting.

"The people celebrated. They came to eat, to hang out, to do business. I sold them fried fish. They did processions around the church," Leonel Mendoza, a local who fishes at the reservoir, said to the AP. He has been taking people to see the remains.

This is the second time the church has been seen since the dam was built — in 2002 the water levels were so low that visitors could walk into the church.