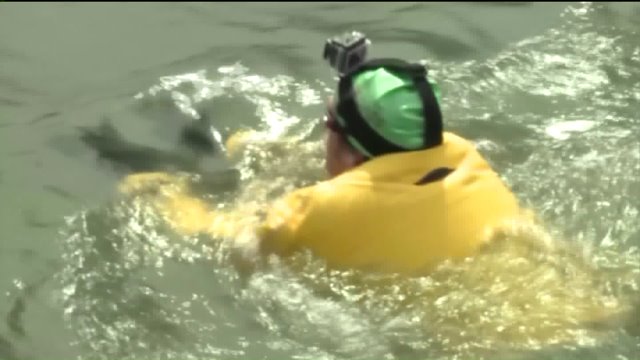 GOWANUS, Brooklyn — A 47-year-old man, nicknamed the Toxic Avenger, will try to swim the entire length of, arguably, the foulest cesspool in America, also known as the Gowanus canal on Saturday.

But why oh why would anyone want to swim in this toxic soup of sewage, chemicals and a sludge called "black mayonnaise"?

"I am a swimmer and I dream of the day I can swim there," Swain said.

Last April, on Earth Day, the clean water advocate first tried a dip in the Gowanus, but rain forced a halt because on a rainy day, raw sewage bypasses the water treatment plants and goes straight into the canal, which can possibly end in Swain's mouth.

"I plan to gargle with hydrogen peroxide," Swain said.

Swain showed PIX11 the grandma style breaststroke he will use, keeping his head above water and all that equipment he'll be wearing.

"So few of us get to live the life we want to live," Kristin Mellen said. "But this is his inspiration and he gets to manifest it."

Others see the swim as a teachable moment.

"He is role model for many," said teacher Nicole Butterfield, who will be in the kayak next to Swain swimming.

Swain is hoping that in 25 years we will all be able to enjoy a clean, refreshing dip in the Gowanus.