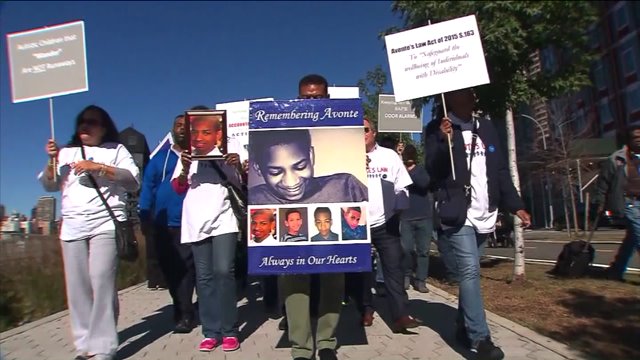 LONG ISLAND CITY — Avonte Oquendo's mother was almost too choked up with emotion to talk about what this March For School Safety meant to her.

"I am overwhelmed by all the support over the past two years, " Vanessa Fontaine told PIX11 News.

Friends and volunteers gathered in Hunters Point South Park to mark the second anniversary of the disappearance of her teenage son with autism.

Avonte walked out the side door of Riverview School in Long Island City and vanished .

Three months later, after an extensive search,his remains were found washed up in College Point.

"We want to make sure the schools are doing enough in terms of safety," David Perecman, the family's lawyer, told PIX11.

Avonte's disappearance lead to legislation requiring the city's Department of Education to evaluate if schools should alarm their doors.

But Avonte's mother says not enough is being done.

"I want whoever was responsible for letting my son leave school be held accountable," Fontaine said. "I don't have my son anymore and they should lose their jobs."

Perhaps most moving at today's March were the people who showed just because they don't want another tragedy like Avonte's death to happen again.

"I was just walking by and I saw this March and I recognized the mother from tv," Arlene Delgado told PIX 11. "I have a new ogre with autism and this hurts."

The family of Avonte Oquendo is suing the city for his death.