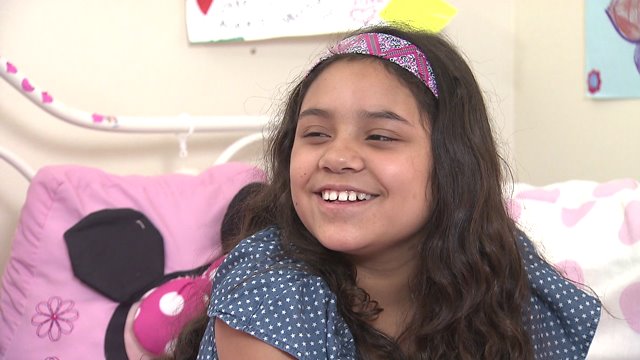 In this week`s It`s a "G" Thing, PIX11`s Mr. G sits down with one little girl battling a brain tumor to see how one local nonprofit is helping her make a movie.

She's a girly girl, she loves to laugh and she'll dance away with your heart.

Melany Jurado is nine years old and has already gone through more than most.

“It was just straight, your daughter has a brain tumor," Gloria Jurado remembered. "I just looked at my husband, telling him, we are going to lose our daughter.”

That was six years ago. It's a benign tumor and doctors say it's too risky to operate on right now. The growth slightly affects her ability to communicate and learn.

“In my heart, I know she’s going to have a happy life, and grow up like a normal child,” Gloria said.

And one person is helping make that happen.

“She started dancing and I just saw her face lit up," Stephanie Angel said.

Stephanie Angel is the founder of the nonprofit, Angelight Films.

Her parents created the Children's Brain Tumor Foundation soon after.

“The more kids that I met that had brain tumors I just noticed they have this spark of life in them," Stephanie said. “So I thought what could I do to work with these kids.”

Stephanie works in media production and one day decided she wanted to help kids make films about themselves.

She spends months with the kids and families brainstorming and planning.

Then it's time for lights, camera, action! Complete with hair, makeup and costumes.

It's an exhausting couple of days, but it's all worth it once it's edited.

“I can’t wait!" Melany said, months later at the screening.

Surrounded by family, friends and snacks, it's showtime!

“The biggest reward is just seeing the child’s passion come to life and seeing their spirits not being pressed down,” Stephanie said. "It’s really nice to see a kid be a kid.”

“Let’s do it again!” Melany smiled.