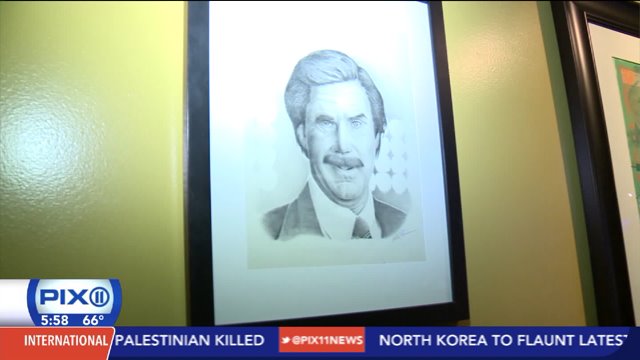 MANHATTAN — "Stay Classy New York," a Will Ferrell-themed bar, opened in the Lower East Side, and it has some of your favorite Ferrell characters represented in one place.

So let's be honest. If you had a nickel for every classic one-liner Will Ferrell is responsible for, you’d have a ton of nickels. From a former President to a clueless step brother, his characters are timeless.

So imagine a place where you can chill, throw a few back and soak in some Ferrell-isms – all while staying classy.

The charming neighborhood bar, located at 174 Rivington St., is the brainchild of Zach Neil and a co-partner who credit Ferrell as being a constant source of joy for them over the years.

“Probably the deal sealer was the first Anchorman movie,” Neil told PIX11, describing the piece of work of Ferrell’s that made him a hardcore fan.

“That one was sort of like, he’s created something that’s absolutely ridiculous and I love it and I watched it five times a week for three years.“

From Brennan Huff to Ricky Bobby, each of Ferrell’s zany characters has a home inside the cozy establishment that will eventually hold movie nights.

“This bar is kind of like the place where a 35-or 40-year-old person could come and sit and not be intimidated by loud techno music but still be surrounded by things that are funny and ridiculous and kinda get it,” he said. “That’s what Will Ferrell has always meant to us.”

If you’re not sold by the décor, the splashy drink menu featuring cocktails like “You’re My Boy Blue!” will keep you there for more than just one.

Neil said he hasn’t heard from Ferrell yet about the tribute bar, but has already played out in his head how he would like to host the comedian.

“I’d rather it be like a Tuesday night and its dead in here and he just walks through the door,” he said. “That would be better than me reaching out and trying to be like – hey come to the bar we love you man.”

“Stay Classy New York” is currently open for business but is in its preview phase. On Oct. 23, the bar will be having an Anchorman-themed Halloween party and will be giving out prizes for the best costumes.