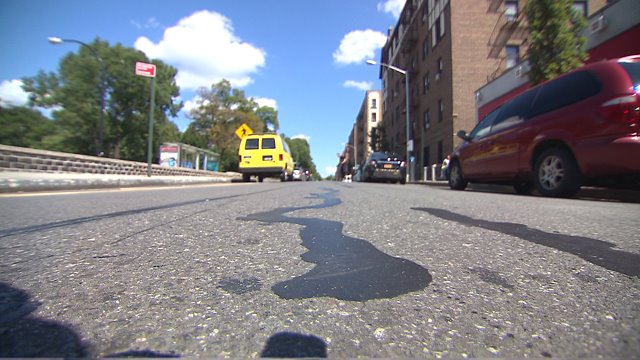 THE BRONX – Pelham Parkway is one of the busiest roadways in the Bronx. Last year one side, Pelham Parkway South, was reconstructed at a cost of $36 million. However, according to John Fratta, from Community Board 11, “the taxpayers got ripped off. This whole roadway, 6 months after they completed the resurfacing , we started seeing cracks throughout the whole project area.”

While it is not clear what caused the cracks, local officials say the contractor made things worse by filling the cracks with tar. Now, throughout the entire roadway, you see these veins of tar running in all directions. Local residents  say it’s “a mess, it’s terrible, it doesn’t look good.” The community board calls it a “Band-Aid” approach to repair and is demanding that the entire roadway be resurfaced.  They reached out to PIX11 and to Bronx City Councilman Jimmy Vacca.

Vacca says “I called the Department of Design and Construction into my office and said what’s existing now is unacceptable.  The DDC is in charge of overseeing big NYC projects , including the Pelham Parkway reconstruction. Vacca says the DDC admitted the job had been botched but couldn’t say who was responsible.  “I think we’re owed an explanation as to how this happened and why,” says the Councilman.

But at the same time, Vacca says the meeting produced some very good news. Next year, Pelham Parkway North is scheduled to be reconstructed, and the DDC agreed  that while that is happening,  the contractor will redo the paving on the south side. The tar filled cracks will be covered over and according to Vacca, “It’s gonna be a smooth riding surface that we should have had from the very beginning.”