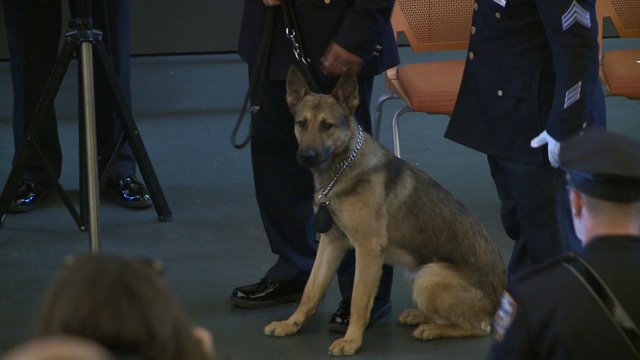 On Tuesday, the NYPD’s Transit Bureau Canine Unit added 15 more of these highly trained pups to the growing force.

Following a rigorous selection process and intense training at the NYPD’s Police Academy, the dogs graduate honing the skills that will help them protect New Yorkers from typical crime activity as well as terrorism.

Each dog also graduates with a new name, a name that honors a fallen NYPD officer killed in the line of duty.

“These memories and these officers are woven into the fabric of our NYPD family and the work that they started will continue in the canine’s name,” said Sgt. Randy Brenner, the head of training for the Canine Unit.

“For the handler – the person on the other side of that leash – it brings it home,” Lt. John Pappas, Commanding Officer of the Transit Bureau Canine Unit explained.

“Its as if that human as well as that canine were adopted by that family.”