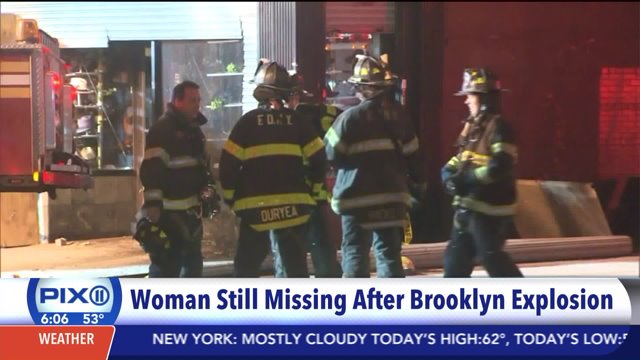 BOROUGH PARK, Brooklyn – Authorities are desperately searching for a mother of two teenagers who lived in a Brooklyn apartment building that was destroyed in a fatal gas explosion Saturday afternoon.

Francisca Figueroa, 48, was last heard of on Saturday before the blast on 4206 13th Ave. that left one dead and more than a dozen injured. Authorities identified Ligia Puello, 64, as the victim who was killed in the Borough Park explosion.

Niurca Figueroa, one of Francisca's sisters is at loss of words as to her sister's whereabouts. By all indications, her sister seemed to be "okay" when she lost spoke to their other sister, Maria.

"I can't think," Figueroa, 44, said. "I don't know what happened. She didn't have any problems. My sister is a good person."

The Daily News reports Figueroa was involved in an ugly spat with her landlord who wanted her to leave the apartment and was in the process of moving out. Figueroa was also a hairdresser in Brooklyn.

FDNY Commissioner Daniel Negro said the fire apparently started after a stove was disconnected. The incident showed signs that it was gas-related.

According to MAG-V, a veteran housing advocacy group claims the building in question was never inspected by the city.