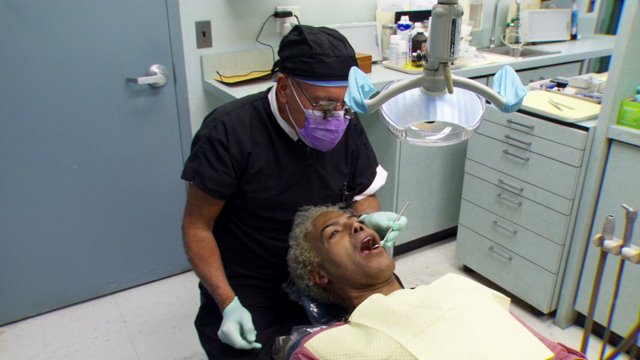 In this week`s It`s a "G" Thing, PIX11`s Mr. G shows us how one local dental clinic is cleaning teeth and changing lives.

“He restored my confidence," Gerard Dure smiled. “He gave me back a very strong sense of self.”

If a smile is worth a thousand words then the person responsible for that smile is priceless.

"This is his own magic!" Dure said.

“From the moment I got here, as far as I’m concerned, it was right for me,” Dr. Mark Schufman said.

“Can you tell us how this got started for you?" I asked. "I answered an ad in the New York Times.”

The ad was for Project Renewal.

The nonprofit opened the clinic in 2004. It's the nation's only shelter-based dental clinic inside the Fort Washington men's shelter. Last year, it served nearly 2,500 patients.

"There are dentists that make a lot more money but I’m the luckiest," Dr. Schufman said. "I get all the gratitude!”

“I certainly have changed," Dure said. "This is not just a regular change, it’s a life change.”

For Gerard Dure, life used to be much different.

“I specialize in celebrity hair and makeup, so I do hair weaves,” he described.

He was even featured right here on Channel 11 back in 2003. But years later, he went from being on tip to hitting bottom.

"I had a home invasion at one point, that gave me a disability, I was robbed and shot,” he remembered. "From that some other tragic events happened, with my mother dying and allowing depression to lead me to alcoholism.”

Dure lost just about everything except his clients. One drunken night, he feel, busted his head open and broke two of his front teeth.

“The celebrities that I do, until now, they’ll know now, they don’t even know that I'm homeless," Dure revealed. "Would they talk to you if they found out you had no teeth and are homeless? " I asked. "Sure, because they want their hair done before they go on stage," he laughed.

With Dr. Schufman's help, he was able to keep his personal and professional lives separate and regain his self-esteem.

Dure's now sober, working and has since moved into his own apartment with the help of Project Renewal.

As for Dr. Schufman, well, he says he's just happy to be part of the solution.