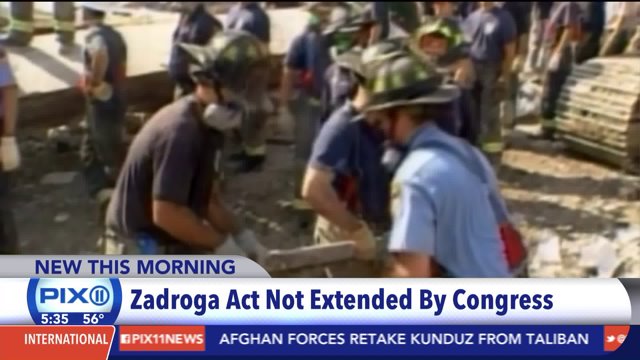 Patients still can get their health care for now but the program's administrators warn it will face challenges by February and will have to begin shutting down by next summer.

"They are leaving first responders, on the battle ground, that's what they are," Alleys said. "We are dealing with sick and dying members for 14 years."

The Zadroga Act, or 9/11 Health and Compensation Funds, is meant to help first responders who suffer illnesses from working the days, weeks and months after the attacks on Sept. 11, 2001.

More than 72,000 receive medical monitoring for cancers and other illnesses, and tragically more than 1,700 have died. In fact, since last month's 14th anniversary, seven more first responders have died.

Alleys said his phone has been ringing constantly with members asking, "Now what?"

"We have 2,000 members in the program, 1,000 active and retired dealed with 9/11 cancers where the costs are astronomical," he said. "We told them to find solace and we will work on it."

In the short term, the program will continue until September 2016. That's when the money already set aside is expected to run out.

NY Sen. Kirstin Gillibrand published an op-ed in the Daily News asking once again for Congress to act, while attorney Noah Kashlefsky, who has worked with first responders since the day after the attacks, echoed the same sentiment.

"This is an American issue, a nationwide issue," he said. "We must act and get it done."