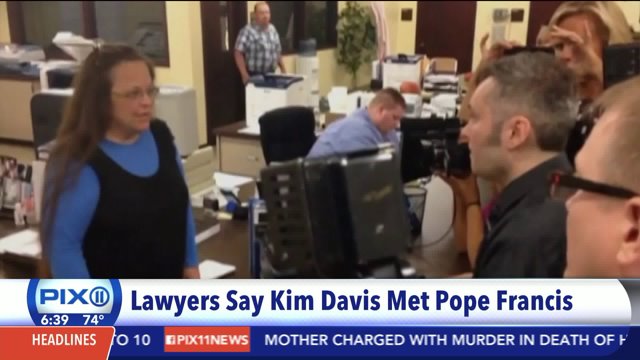 Kim Davis, the Kentucky clerk who spent six days in jail for refusing to issue marriage licenses to same-sex couples, met privately with Pope Francis last week during his visit to the United States, her legal team said.

The meeting took place Thursday at the Vatican Embassy in Washington, according to the statement on the Liberty Council website.

Mat Staver, the lawyer for Davis, said the session lasted 10 minutes and was just between the pope, his client and her husband. He said pictures were taken and will be released at some point. He didn't say when or why they weren't being released immediately.

"I was humbled to meet Pope Francis. Of all people, why me?" Davis said in the statement. "Pope Francis was kind, genuinely caring, and very personable. He even asked me to pray for him. Pope Francis thanked me for my courage and told me to 'stay strong.'"

Vatican spokesman Rev. Federico Lombardi did not deny the encounter took place but said he had no comment on it, the Associated Press reports.

On Sunday, during a news conference on his flight from Philadelphia to Rome, Francis was asked a question about public officials refusing to carry out their duties as a matter conscience.

No direct mention of Davis was made.

A federal judge ordered Davis to jail earlier this month over her refusal to issue marriage licenses to same-sex couples in the Kentucky county where she's clerk. Before being ordered to jail, Davis also refused to allow clerks in her office to issue licenses. She cited her biblical opposition to same-sex marriage.

Davis spent six days in jail for contempt of federal court. Since her release, Davis has allowed the licenses to be issued, but only with her name and title removed. Each license includes a statement saying it is issued "pursuant to a court order."