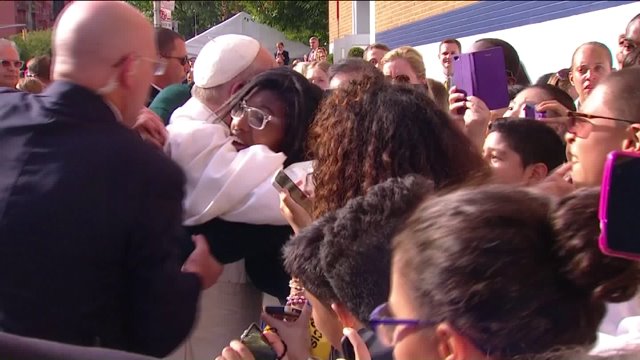 EAST HARLEM – While meeting a group of young students in East Harlem, security had to pull one girl off of Pope Francis Friday afternoon.

So many young students from Our Lady Queen of Angels School were taking selfies and photos that the pope often had to search for a free hand to shake -- but one student decided to go in for the hug.

Pope Francis didn't hesitate and hugged the girl, but when she began rocking the 78-year-old back and forth in a strong embrace, security stepped in.

A security detail member forcibly separated her from the pope, but the pontiff appeared unperturbed.

With a large smile, he continued to meet the third and fourth graders, posing for selfies and shaking hands as he moved down the line.