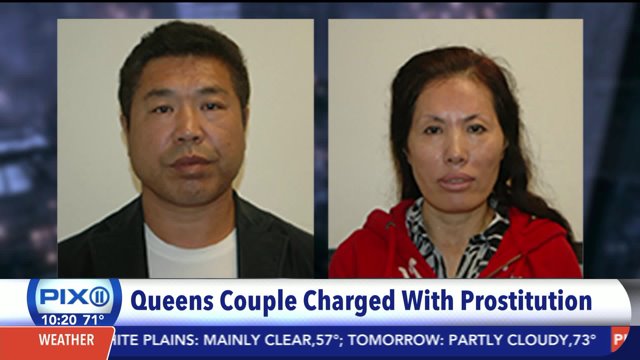 MINEOLA, N.Y. – A Queens couple has been charged with sex trafficking after forcing two of their employees into performing sexual acts on customers in massage parlors they owned in Nassau County, a county prosecutor announced Thursday.

Zhaowei Yin, 49, and his wife, Shuwen Ai, 46, of Flushing were arrested by authorities following a months-long investigation by Nassau County police and District Attorney investigators.

"Trafficking individuals like the women in this case are the victims of modern-day form of slavery happening all around us in communities across the country," Acting Nassau County District Attorney Madeline Singas said. "This is what slavery looks like in 2015."

Singas said that between May 2013 and the end of January of 2014, the accused allegedly hired two women responding to ads in Chinese-language newspapers to give massages, but began to perform sexual services on men at two different locations in Long Island.

According to investigators, these victims were forced to sleep at the locations and one of them was never paid by the defendants. They would charge her for transportation and for sleeping at the venue, even though she was forced to dorm there, Singas said.

The defendants also threatened the victims with several ploys including deportation and sending a naked photographs to local media, according to Singas. Even when one of the victims was allegedly subjected to physical violence by a customer, the defendants told her to continue performing whatever services were requested, she added.

It wasn't until the women were arrested and charged during an undercover sting by the Nassau County Police Department that it was discovered they were victims of sex and labor trafficking. Charges against were subsequently dropped and an investigation into their employers was launched.