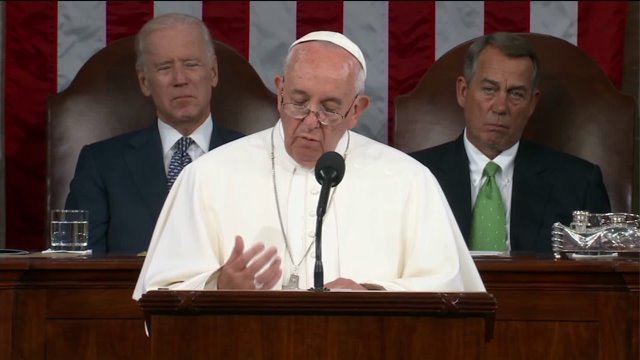 WASHINGTON – In a year of political divisiveness, Pope Francis emerged as a global political leader rather a moral and spiritual voice alone.

In his speech before Congress, he was blunt, speaking out on such pressing matters such as immigrations and climates change – issues already reverberating in next year's presidential race.

The Holy Father hit high notes and loud applause among liberals and at times lesser enthusiasm from conservatives. He laid out a counter argument to some conservatives like Donald Trump who would deport undocumented immigrants. He said we should not be fearful of foreigners because most of us were once foreigners ourselves.

"We must not be taken back by the numbers but view them rather as persons, seeing their faces and listening to their stories," Francis said.

The Pope's view seemed a little too far left for some Republican presidential hopefuls like Governor Chris Christie, who said he disagreed with the Pope.

Clearly conscious that many conservatives in the chamber are skeptical that people are contributing to global warming, Pope Francis challenged for conversation on the issue.

"Since the environment challenges we are undergoing and its human root concern and affect us all," he said.

Donald Trump, whose been pushed from the headlines by the Pope's visit, said, "I like the Pope," but insisted he's not a believer in climate change, claiming changes are simply weather.

"The fight against poverty and hunger must be fought constantly and on many fronts," Francis said.

The Pope drew cheers, especially from the Republican side of the House. When he spoke of the need to protect human life– a reference to abortion and a smatter of applause when he called for the abolition of the death penalty globally.

Jeb Bush wasn't among those impressed. "I don't get economic policy from my bishops or my cardinals or my pope," he declared.

Democrat Senator and presidential candidate Bernie Sanders, however, was impressed.

New York Senator Chuck Schumer told us he was really moved by the Pope's speech.

Once he arrived in New York, the Holy father met briefly with Schumer, Mayor de Blasio and Gov. Andrew Cuomo.