Not a dry eye: Speaker Boehner cries during pope’s speech 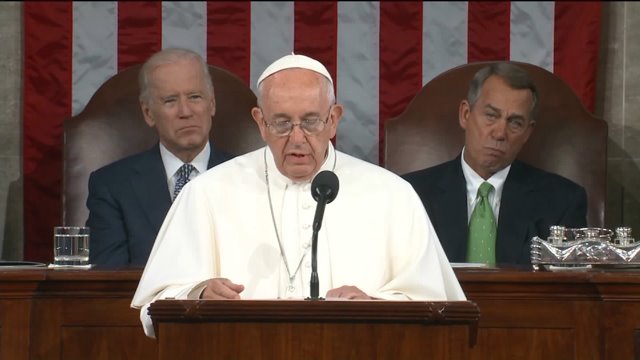 WASHINGTON, D.C. -- In the background of Pope Francis' historic speech before Congress Thursday morning was a crying House Speaker John Boehner, known for his penchant for nearly weeping while overcome at official functions.

In 2013, Politico rounded up 15 times the notoriously emotional speaker welled up, from a speech about struggling Americans to the unveiling of a Rosa Parks statue and an event honoring a late painter.

But Boehner wasn't the only politician who needed a handkerchief. It looked like Vice President Joe Biden, and GOP presidential hopefuls Sen. Marco Rubio and Sen. Lindsey Graham, to name a few, were less than dry eyed.

And perhaps it comes as no surprise that the room was overwhelmed during the pontiff's speech: they were in the midst of history being made.

Thursday's address is the first time a pope has spoken before Congress and his speech was expected to challenge lawmakers on some of the most divisive issues in American politics.

In another gesture designed to make politicians uncomfortable, Francis won’t enjoy a lavish meal with lawmakers on Capitol Hill. Instead, he’ll go directly to a lunch with homeless people helped by Catholic charities.

On the third day of his visit to the United States, Francis, the first Jesuit pope, was expected to lean even deeper into politics than his blunt address on the White House lawn on Tuesday, in which he tackled climate change, immigration, the need to respect religious liberty and President Barack Obama’s opening to Cuba.