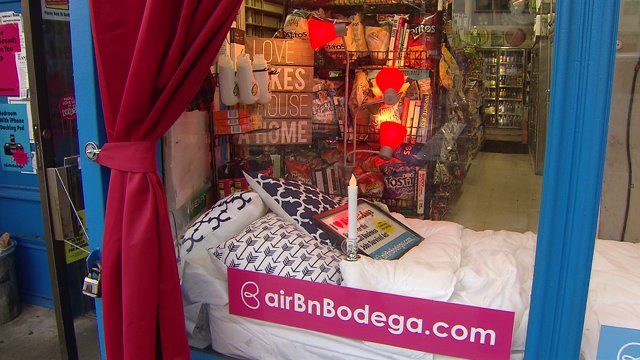 BROOKLYN – Jessie’s Deli on Atlantic Avenue in Brooklyn has a few dedicated customers.

After learning about the proposed rent hike customers  Tommy Noonan and Douglass Cameron decided to use their marketing skills to raise awareness for Jessie’s Deli.

Over the summer the pair staged what they called an artisanal price hike.

“We were like lets raise the prices of everything in the store to mirror whats happening with the rent hike,” Noonan said.

Thursday Noonan and Cameron will unveil the next phase of their plan to raise support for Jessie’s Deli – Air B-n-Bodega. They transformed the deli’s display case into a place to stay.

Cameron explains, “we decided about $329 a night, if we managed to book it out on Airbnb night after night then that would actually help them meet the rent.”

PIX 11 reached out to the owner of the Jessie’s Deli building, but our message was not returned.